CULLOWHEE – The award-winning creative team from Western Carolina University that has done everything from destroying the world with a production of “War of the Worlds” to capturing the spirit of broadcasts from the Cotton Club with their “golden age of radio” re-creations has announced its selection for 2015.

The group will present “Robin Hood – The Legacy” at 7:30 p.m. Thursday, Feb. 26, in the John W. Bardo Fine and Performing Arts Center. Tickets are $10 and proceeds fund scholarships in participating academic departments.

Under the leadership of WCU faculty members Brenda Lilly, Bruce Frazier, Don Connelly and Karyn Tomczak, the show marks the seventh in a series of “academic-based entertainment” productions mounted in collaboration with three departments and two colleges at WCU. Each of the shows in the series hearkens back to the golden age of radio, featuring a live orchestra and sound effects and produced only once before a live audience in the Bardo Arts Center. The group has won six national broadcasting awards for its unique projects.

Actors in the show include WCU students, staff and faculty. Lilly, director of “Robin Hood – The Legacy” and an assistant professor in the School of Stage and Screen, said she likes the challenges of the show’s unique presentation style and that students get to work alongside faculty.

“It is very exciting to be a part of this new radio production,” said Lilly. “The story of Robin Hood and his men and women has intrigued readers and viewers for generations.” The script written by Connelly is “a wonderfully dramatic and unique take on this great old adventure,” she said. 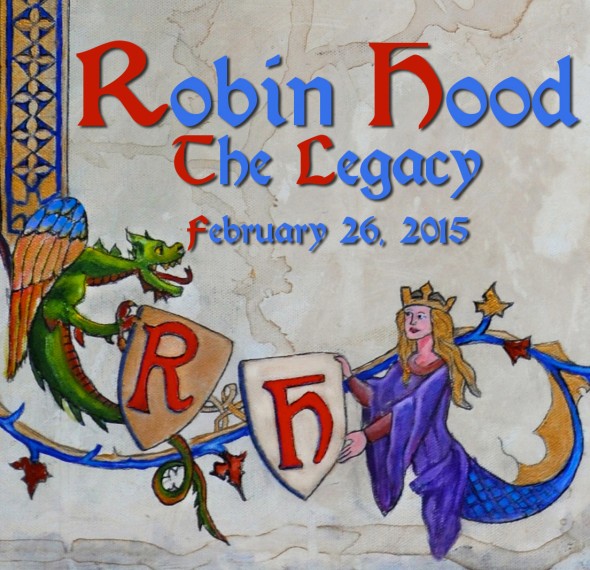 Connelly, professor and head of the WCU communication department, said “Robin Hood – The Legacy” is an entirely new take on a story that is nearly 800 years old.

“Much of the popular folklore of Robin Hood that we know today really came about in the 19th and 20th centuries and was made up by people to make the legendary folk hero commercially attractive,” said Connelly. “So to get a really new take on Robin Hood, I went back to the early ballads that begin to appear in the late 13th century. All of the main characters are there along with tales of love and passion, sinister plots, robbery, sword fights, prison time in a castle and, of course, taking from the rich to give to the poor.”

This is the fifth show Connelly has written for the group, and he said it was a lot of fun to discover the early tales and how the characters came together in the forest.

“The script is also very true to the English countryside,” said Connelly. “All of the locations I used in the script are real places.”

Frazier, the show’s composer and music director and the Carol Grotnes Belk Distinguished Professor in Commercial and Electronic Music, drew from a range of themes and influences to create an all-original musical score for the show. Military flourish, comic flair, Celtic dance, Medieval ballads and monastic chants characterize the musical texture, evoking both the charm of the English countryside and the dangers that lurk in the dark forest, said Frazier. The tones and colors highlight the shifting dramatic emotions ranging from adventure to innocence, deceit, combat, death and, of course, romance, he said.

The WCU Artist-In-Residence Orchestra conducted by Frazier will provide musical accompaniment for the program. The ensemble represents a partnership between WCU and the Asheville Symphony Orchestra through which WCU students play alongside professionals in a collaborative orchestral experience.

“It’s a wonderful opportunity for the winds players and percussion students in the School of Music to perform with professional string players in our region,” said Frazier.

The opening of the program before the broadcast features symphonic masterworks played by the orchestra including Benjamin Britten’s Variations on a Theme and Fugue of Purcell, also known as the “Young Person’s Guide to the Orchestra,” and William Walton’s incidental music to the play and film versions of “Henry V.”

The dance for the production will be performed by dance minors in the School of Stage and Screen to the music of “Suite from Henry V,” said Tomczak, the show’s choreographer and dance program director in the school. Three sections will “set the tone” of the medieval period and reflect scenes from the story of “Robin Hood,” she said.

“It will begin with an elegant and regal Renaissance court dance, followed by a love pas de deux between the characters of Marian and Robin,” said Tomczak. “The culmination battle between Robin Hood and the Sherriff of Nottingham will finish the piece.”

Funding for “Robin Hood – The Legacy” is courtesy of the College of Arts and Sciences, College of Fine and Performing Arts, the Department of Communication, the School of Music, School of Stage and Screen and the Carol Grotnes Belk Endowment.

The Feb. 26 show starts promptly at 7:30 p.m. and no one will be admitted after it has started. The production will be recorded for future radio broadcast.

Tickets for “Robin Hood – The Legacy” are on sale now and can be purchased online at bardoartscenter.wcu.edu or by contacting the Bardo Arts Center box office at 828-227-2479. All proceeds from the event benefit student scholarship funds in the participating departments. The group has raised nearly $40,000 for scholarships.