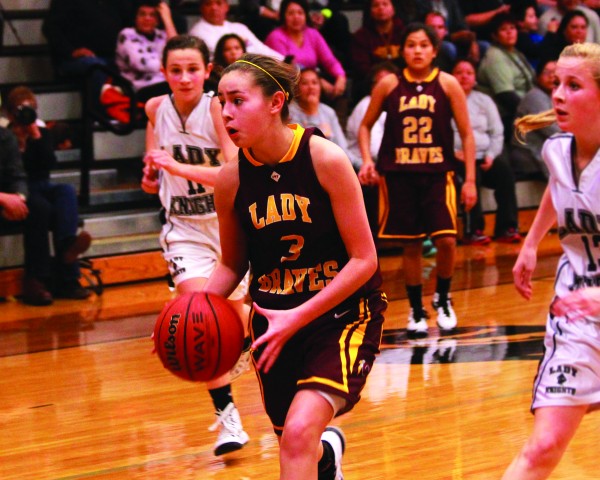 Tori Teesateskie (#3), CMS Lady Braves, brings the ball up the court during a game at Robbinsville on Monday, Jan. 12. Cherokee stayed undefeated with a 44-37 victory. (AMBLE SMOKER/One Feather)

ROBBINSVILLE – The Cherokee Middle School Braves and Middle School  Lady Braves traveled to Robbinsville for an away game against the Black Knights on Monday, Jan. 12.  Both Cherokee teams were able to keep their perfect season intact as the Lady Braves won 44-37 and the Braves won 64-37.

The young Lady Braves had a seesaw battle, falling behind in the early minutes of the first quarter.  However, they were able to overcome their slow start and gain the lead midway through the second quarter, which they held until the final buzzer.

“We knew Robbinsville would give us a tough game; they gave us a good game at home,” said Lady Braves assistant coach Ahli-Sha Littlejohn-Stevens.  “We come to do work.  We come to do what we do best.  We have a solid team and it takes all five of our girls who step out on the court, no matter who it is, to step up to that position and play the best they can.”

The Cherokee Braves boys’ team physically overmatched the Black Knights through the first half as the stifling Braves defense kept the Black Knight’s to four points in the first quarter.  Although Cherokee controlled much of the game, Robbinsville threatened a comeback in the third quarter as the Braves found themselves in foul trouble.  However, Cherokee was able to protect the lead built in the first half and go on to win another game on the road.

“It was a big win for us,” said Cherokee Middle School Braves head coach Spencer Moore.   “We had to fight through some adversity.  We needed a pretty intense game to make us better before this weekend.  Our boys like to play up-tempo and put pressure on people.  We like to score as many points as we can, as fast as we can.”

The Braves enter the Smoky Mountain Conference Tournament on Saturday, Jan. 17 as the top seed.