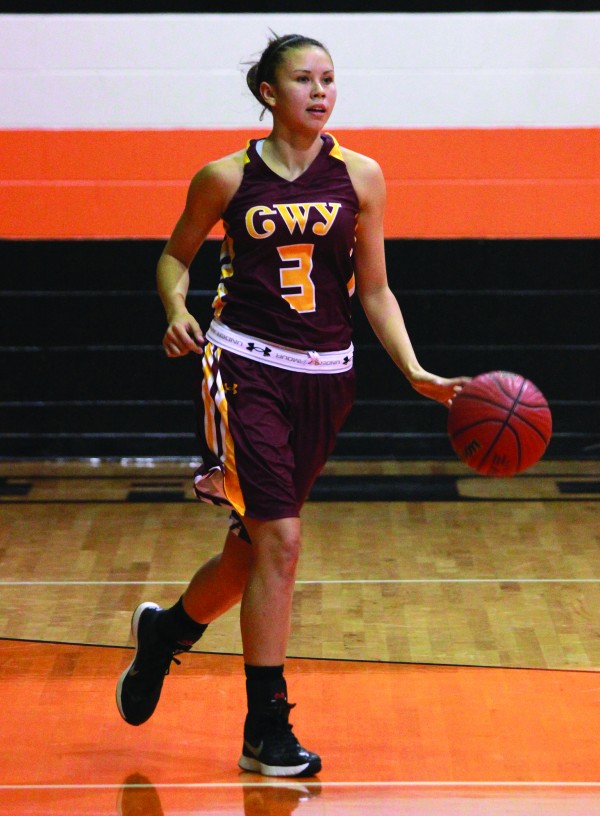 Kendall Toineeta, Lady Braves senior point guard, brings the ball up the court during a game at Rosman on Tuesday, Jan. 13. She led Cherokee with 26 points as the Lady Braves won 74-37 to improve to 13-0 on the season. (AMBLE SMOKER/One Feather photos)

“I thought we played well,” said Cherokee head coach Chris Mintz.  “Our defensive intensity was really, really good.  We were frustrating them and made them turn the ball over a ton.  That was a big-time key for us.”

The Lady Braves took the lead early but accumulated four team fouls early with their potent and stingy defense.  Initially, the Lady Tigers had a tough time navigating through the Lady Braves’ traps and full court press; only scoring seven well-contested points in the first quarter.  The Lady Braves were able to move the ball very well and scored 19 points. 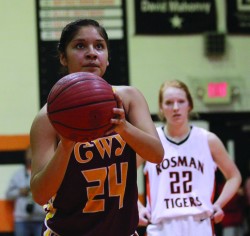 Tiffani Riggins lines up a foul shot during Tuesday’s game. She finished the night with seven points.

As action resumed in the third quarter, the Lady Braves scored 11 unanswered points to extend their lead but calmed the dogs and transitioned to a half court press.  Still, the Lady Braves were able to pick the pockets of the Lady Tiger ball handlers and created scoring opportunities via the fast break and led 65-27 at the end of the third.

The NCHSAA mercy rule would be applied early in fourth quarter as Rosman outscored Cherokee 10-9.

After the game, Lady Braves assistant coach Benny Stamper said, “We kind of walked into the press and let them get the ball in real quick and we got ourselves in foul trouble along the sidelines.  We made an adjustment with that and got onto them about rebounding.  They are starting to buy into the concept of defense wins ballgames.  Offense sells tickets, defense wins ballgames.”

Even as their perfect season continues to roll, the Lady Braves know they still have a lot of work to do.  Coach Stamper commented, “They are starting to believe, and we’re starting to gel.  It’s coming along really well.  Everybody’s getting along.  They realize they have a target on their back and everybody wants to be the team to beat them.  That helps them to stay humble and some of the leadership from the upperclassmen, they are captains and they help our practice.  They are captains for a reason.  They take on leadership roles, and everybody is starting to define each other’s role and they know where they are supposed to be and know what their part is.”

To view and purchase photos from this game, visit https://onefeather.smugmug.com/SPORTS/BASKETBALL/LADY-BRAVES-BASKETBALL-201415/At-Rosman-January-13/