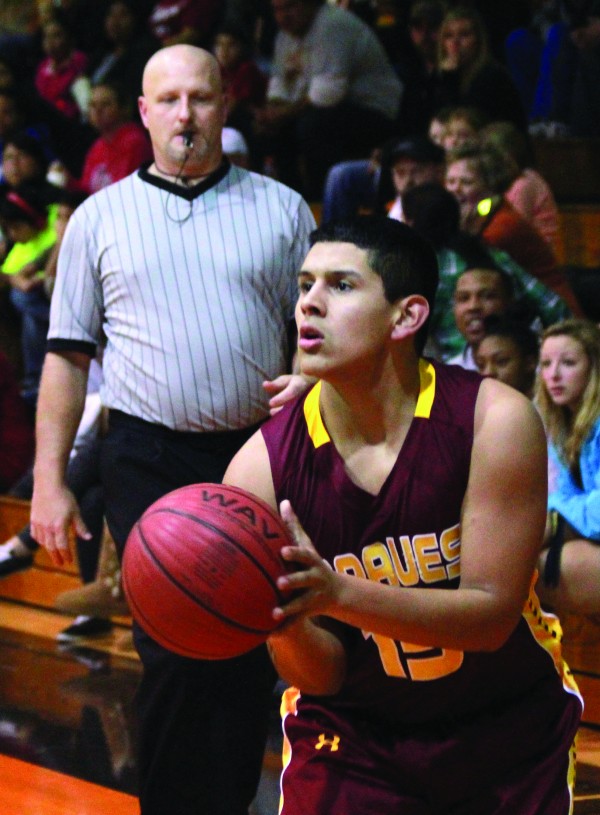 Kennan Panther, Braves forward, lines up a shot during Tuesday’s game at Rosman in which the Braves won 103-71. (AMBLE SMOKER/One Feather)

ROSMAN – The Cherokee Braves (14-0) recorded their first 100 point game as they defeated the hosting Rosman Tigers 103-71 on Tuesday, Jan. 13.  The high scoring affair was highlighted by an impressive second quarter 40-point performance from the Braves.

“We gave up way too many easy baskets,” said Braves head coach Willis Tullos. “We didn’t play very good defense, but we played pretty good on offense.  It was two good shooting teams out there.”

Cherokee took a commanding lead out of the gate, building a double-digit lead in the opening minutes of the first quarter.  The resolute defense of the Braves flustered the Tigers early as Rosman tried to match the intensity of the Braves but struggled to find a handle on the ball.

The Dustin Johnson and Kennan Panther led defense besieged Rosman ball handlers, forcing the Tigers to resort to inbounding the ball with Hail Mary type passes to the opposite side of the court.   However, late in the opening quarter, the Tigers were able to find a soft spot in the Braves defense and, with the help of the 3-point shooting by Zach Stroup, close the gap to 10 points as Cherokee took a 28-18 point lead to the bench.

Cherokee came off the bench with the same unrelenting offensive intensity by knocking down field goals and 3-pointers to accumulate an eye popping 40-point second quarter performance.  The Tigers put up a respectable 13 points during the same quarter but were just simply unable to keep pace as the Braves took a 68-31 lead into the locker room at the half.

As the teams entered the court after the 10-minute intermission, the Tigers were able to find their footing by scoring early to chip away at the tremendous Cherokee lead.  However, after a Coach Tullos timeout, the Braves found their rhythm and picked up where they had left off in the first half.  Late in the quarter, the NCHSAA mercy rule went into effect and a mandatory running clock would be utilized for the remainder of the game.  Both teams put up 21 points to draw the third quarter to a close with a score of 89-52.

Cherokee would go on to add 14 points through the final eight minutes as the Tigers added 19.

Stats for the game were unavailable at press time.

To view or purchase photos from this game, visit https://onefeather.smugmug.com/SPORTS/BASKETBALL/BRAVES-BASKETBALL-201415/At-Rosman-January-13/