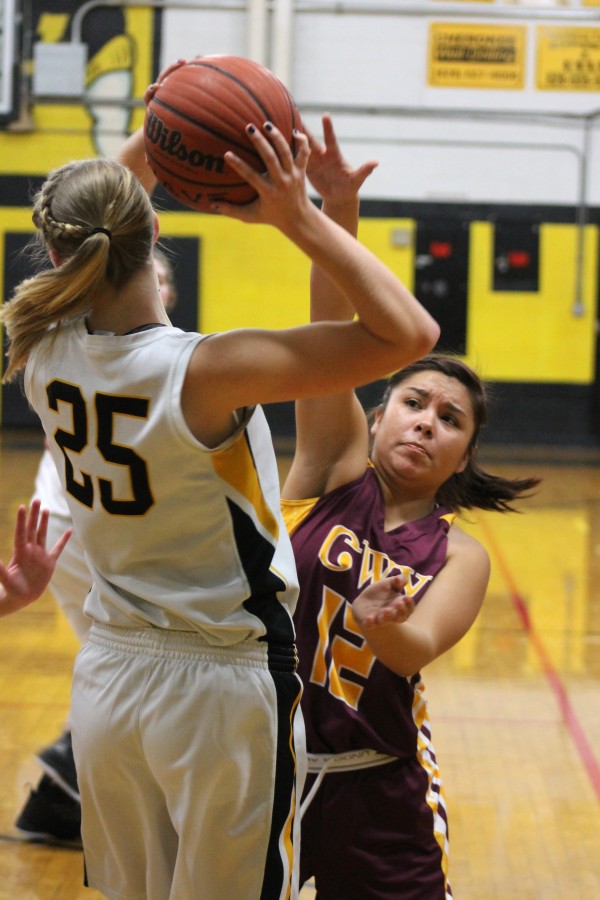 Bree Stamper (#12), Lady Braves junior guard, plays tough defense against Murphy’s Emma Stroup (#25) during the first half of a game at Murphy on Tuesday, Jan. 6. Cherokee won 72-34 and improved to 11-0 on the season. (SCOTT MCKIE B.P./One Feather photos)

MURPHY – Cherokee (11-0) scored 1/10th of their total points in the first minute as they jumped on the Lady Bulldogs of Murphy 72-34 on Tuesday, Jan. 6.  Cherokee, who remained unbeaten on the season with the big win, was led by seniors Kendall Toineeta and LeLe Lossiah who scored 25 and 14 points respectively.

“In the first half, I thought we played pretty good,” said Chris Mintz, Lady Braves head coach.  “Then, it became sort of a blowout so it was an ugly game in the second half, but a win is a win and that’s the main thing right now.”

The Lady Braves came out swinging and led 7-0 after just 60 seconds and led 17-6 midway through the first period.  Cherokee led 25-13 at the end of the first. 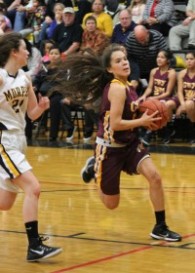 LeLe Lossiah (#5) steams up the court on a fast break. She scored 14 points on the night.

The Lady Braves kept their stifling defense going in the second period and scored the first 12 points to take a 37-13 lead just a few minutes in.  In that period, the Lady Braves held Murphy to four points while scoring 19 of their own to take a 44-17 lead into the locker room.

Not much action happened in the third period as both teams scored six points, and Cherokee led 50-23 at the end of three.  Both teams got it going a little more in the fourth period, and the Lady Braves outscored Murphy 22-11 to take the big win.

To view and purchase photos from this game, visit http://onefeather.smugmug.com/SPORTS/BASKETBALL/LADY-BRAVES-BASKETBALL-201415/At-Murphy-January-6/i-b3MdmPV