Roxanne Dunbar-Ortiz has penned a work designed to set the record straight with her concise account of the major points of aboriginal history in relation to the U.S. in “An Indigenous Peoples’ History of the United States.”  Acknowledging from the get go the impossibility of presenting in a single volume a complete, detailed history of the many nations present when the United States first began to take shape as a country, and even as they exist within the borders of the colonial giant today, she embarks instead upon a telling that centers around myth busting and the effects of the colonial mindset on the sovereignty (and oftentimes even the bare bones existence) of indigenous nations faced with the ever surmounting greed for land and resources, and of course how that mindset and the perpetuation of the myths created by it have affected the telling of history as the years have passed. 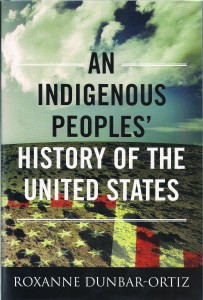 In “Follow the Corn,” the first chapter of the book, she makes clear the complexity of trade routes and other interactions among many nations in what is now the United States and other parts of the Americas, putting to rest the notion that Europeans came and found a vast, undeveloped wilderness ripe for the taking. Subsequently, in the chapter entitled “Culture of Conquest,” she traces the roots of the notion of white supremacy and a predisposition to colonialism with what will be for many a startling analysis of certain aspects of European history.

Much of the rest of the book recounts the effects of the colonial mindset, the doctrine of discovery, and more importantly, the centuries of resistance on the part of Native peoples faced with the ever encroaching power of the behemoth at their borders and how that resistance continues even today. Dunbar-Ortiz concludes with a searing exposé on the ramped up militarization of the United States today, the effect of that on Native nations, and a look toward what the future may hold.