TAHLEQUAH, Okla. — A copy of the Lord’s Prayer in the Cherokee language carried by a Cherokee World War II veteran is now in the possession of the Smithsonian Institution’s National Museum of the American Indian in Washington, D.C. 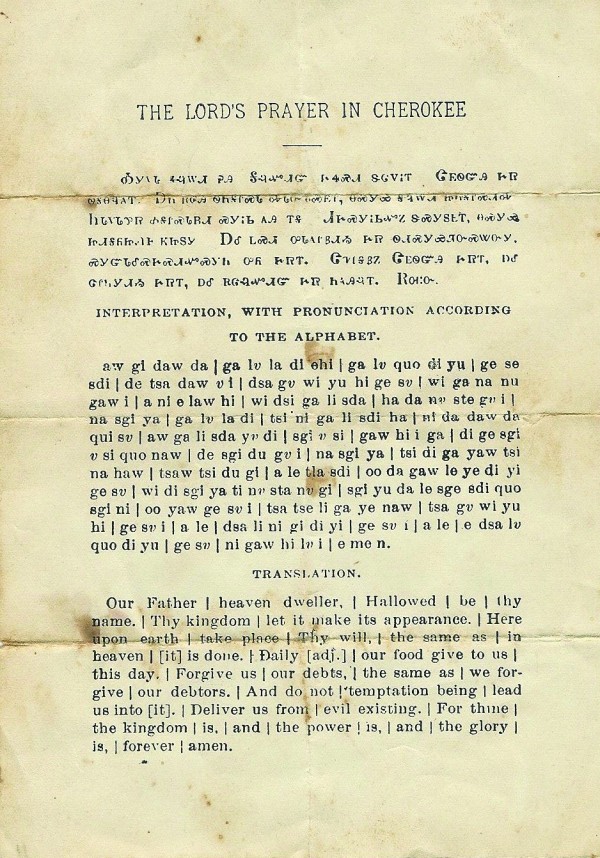 The late Cherokee Nation citizen and U.S. Army veteran Woodrow Roach carried this copy of the Lord’s Prayer in Cherokee while serving in Italy and the Philippines during World War II. The copy of the prayer is now in the permanent collection of the National Museum of the American Indian in Washington, D.C. (Photo courtesy of Cherokee Nation)

The late Woodrow Roach of Tahlequah fought for the U.S. Army from 1944-45 and believed the prayer to be his good luck charm while serving in Italy and the Philippines.
Roach’s family says they donated the prayer to the museum as a way to honor their patriarch’s sacrifice.
“Our family has so much respect for veterans and the sacrifices they all make,” said Della Boyer, of Denton, Texas, Roach’s granddaughter. “We just wanted to share a special piece of our family history with others from around the world. I know there will be many veterans and families that can relate to my grandfather carrying this prayer with him during the war. Many soldiers needed that one thing that gave them comfort and security during very trying times.”
Thirty-two years old when he went to war, Roach chose to fight for his country even though the Army said he could opt out since he had three young children at home. He completed his basic training at Fort Chaffee near Fort Smith, Arkansas and then joined the fight in Italy.
While serving in Italy, a road grader of the Army came under fire and blocked the path of Roach and the other men. Roach crawled to the grader on his stomach and moved the machine so the men could proceed down the path and fight back.
After his heroic efforts, Roach was sent to the Philippines and transferred to an engineering company that built bridges since he was able to operate heavy machinery.
“I’m not surprised that my grandfather would crawl out in enemy fire to move the grader. He was a little bitty guy who could kick butt and take names later,” said Boyer. “He was tough, but he cared about his fellow man.”
After completing his service, Roach worked for the Bureau of Indian Affairs and taught at Sequoyah High School for several years.
The date for showcasing Roach’s prayer at the museum has yet to be determined.
The National Museum of the American Indian is located on the National Mall in the nation’s capital. The museum possesses an expansive collection of Native American artifacts, photographs and other objects. The museum is part of the Smithsonian Institution, which consists of 19 world-class museums, nine research centers and a zoo.