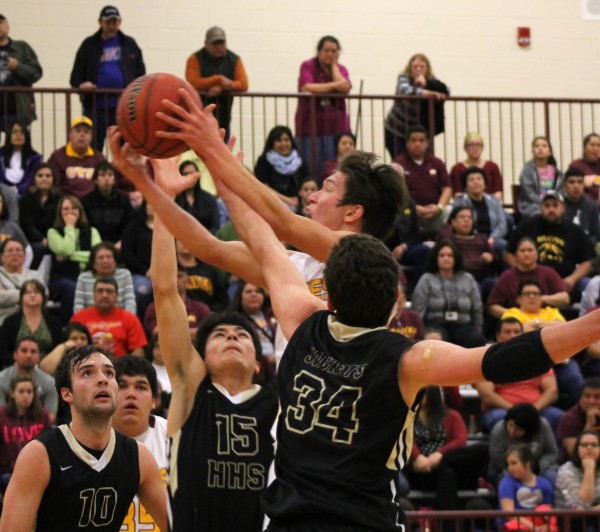 Dustin Johnson (center), Braves senior point guard, threads the needle as he goes for a shot between Hayesville’s Hunter Reaux (#15) and Zach Cottrell (#34) during a home game on Friday, Jan. 2. Johnson led Cherokee with 30 points as the Braves stayed undefeated and took control of first place in the Big Smoky Mountain Conference with a 65-53 win. (SCOTT MCKIE B.P./One Feather)

“That was a good one,” said Willis Tullos, Braves head coach, after the game.  “It was one that we really needed badly.  They’re always really, really good, and to get a double-digit win here is saying a lot for our kids.  I thought we played with a lot of poise and a lot of intensity.  I was really proud of them.”

The game started out slower than expected with both teams missing early shots.  The score was tied 4-4 midway through the first period.  Eli Littlejohn, Braves center, hit several shots early, but he also drew three fouls in the first few minutes and sat until the third period.  He finished the game with eight points. 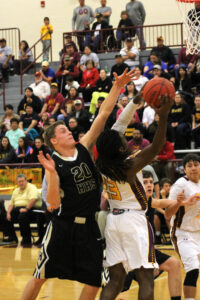 J.J. Benjamin (#23), Braves forward, goes inside and around Hayesville’s Braxton Cox (#20) for a layup in the first half of Friday’s home game. Benjamin had 11 points on the night.

J.J. Benjamin, Braves forward, scored seven points in the first period to help put the Braves in front 20-14 at the end of the first.  He ended with 11 points on the night.

Hayesville came back and drew to within two at 25-23 at the 4:33 mark in the second period.  Then, Brandt Sutton, Braves forward, hit a three-point shot and a subsequent lay-up to help extend the Braves lead and Cherokee was able to take a 34-27 lead into the locker room.

Both teams hit some field goals early in the third period and Cherokee led 40-36 a few minute in.  Then, Johnson hit two three-point shots in a row to give the Braves a boost and a 10 point 46-36 lead.  The period ended with Cherokee on top 48-38.

The closest Hayesville got in the fourth period was six points, 55-49, at the 3:23 mark.  At that point, Cherokee took a time out.  Coming off of the time out, Johnson took the inbounds pass, dribbled down the court and threw a pass to an open Benjamin in the paint for an easy layup to give Cherokee an eight-point lead.

Hayesville tried to come back, but the Braves extended their lead and took the 65-53 victory.

To view or purchase photos from this game, visit https://onefeather.smugmug.com/SPORTS/BASKETBALL/BRAVES-BASKETBALL-201415/Vs-Hayesville-January-2/i-qGn6Jkw