Leslie Shannon Swimmer, an EBCI tribal member from the Painttown Community, was sworn-in as the new Clerk of Court for the Cherokee Tribal Court on Monday, July 28.  She obtained her bachelor’s and juris doctorate degrees from the University of Kansas and received a master’s of science degree from Western Carolina University. 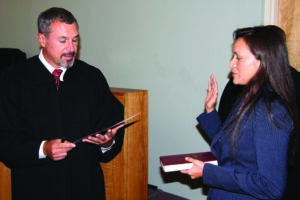 While in law school, Swimmer was president of the Native American Law Students Association and was a member of Phi Alpha Delta Law Fraternity.  Through her previous work experience on the Qualla Boundary, she has gained valuable knowledge of many aspects of the EBCI and the Casino.  She interned with the Office of the Principal Chief and worked with the EBCI Human Resources Department, the Cherokee Preservation Foundation and Harrah’s Cherokee Casino in various capacities.

Swimmer also interned with the Office of the Tribal Prosecutor, where she performed actual courtroom work under the third year practice rule for law students.  She is excited to move back to Cherokee and be a part of the tribal justice system, which has been a goal of hers since before she entered law school.

She is the daughter of Nancy Maney and Don Swimmer and the granddaughter of John Henry and Louise Bigmeat Maney and Luke and Amanda Swimmer.  Shannon has two children, Naomi and Elijah.  She is also looking forward to being involved in the community and spending time with family, as she has been away at school for some time now.

“The Cherokee Court is particularly excited about Shannon becoming Clerk because of her local connections and the fact that she has a legal education,” said Court officials.  “As Clerk of Court, one of her most challenging responsibilities will be to sit as the Ex-Officio Judge of Probate for all estate proceedings before the Court.  The complexities of estate work on the Qualla Boundary have increased greatly since the formation of the Cherokee Court and a law degree will be a tremendous asset for the Court and for all members of the Tribe.  Additionally, her master’s degree will be invaluable as the Court re-writes its internal policies and procedures.  Once Shannon begins work she will be attending trainings presented by the North Carolina Court Clerks and the Institute of Government at The University of North Carolina at Chapel Hill.”