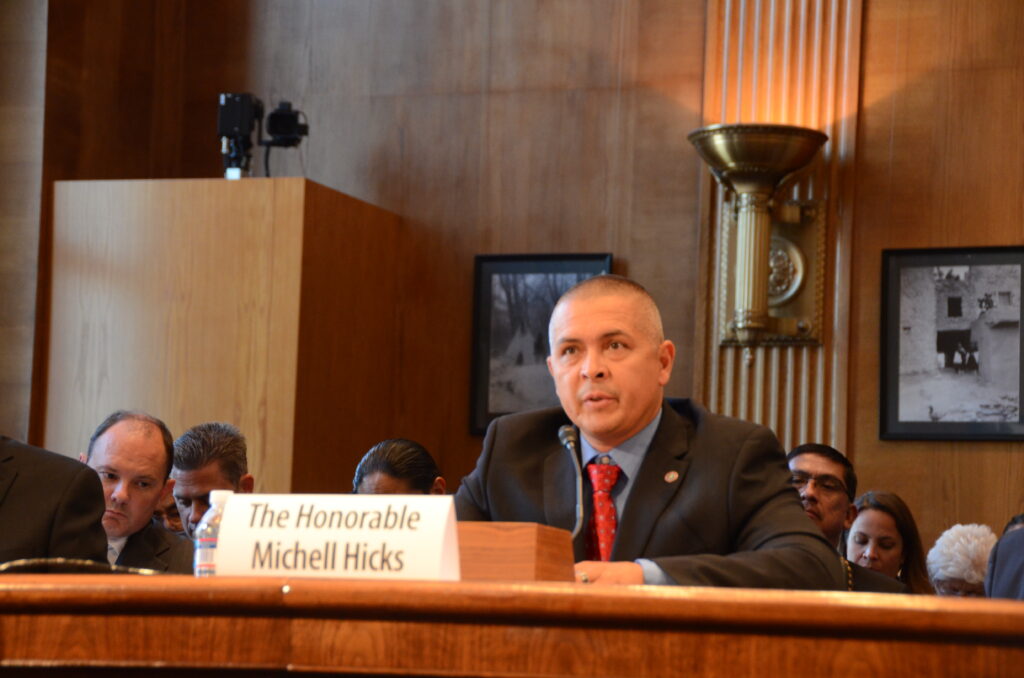 WASHINGTON, D.C. – Principal Chief Michell Hicks told a U.S. Senate committee in testimony on Wednesday, July 23 that gaming on the Cherokee reservation has had a “dramatic impact” on the lives of Cherokee families and especially children in ways “we never dreamed possible.”

“Before tribal government gaming came to Cherokee, our people struggled to get by in challenging economic conditions,” Chief Hicks said, noting that the tribe was forced to depend heavily on seasonal tourism that produced mainly low paying jobs. Families were split, Chief Hicks added, “because people would have to travel off the reservation for work, sometimes for extended periods of time, to support their families in construction or other jobs. This situation tore at the fabric of the foundation of our society, our families.”

With the opening of the Harrah’s Cherokee Casino Resort in November 1997 came a large, complex, multi-product enterprise and tourist destination that now attracts more than 3.1 million visitors each year. Chief Hicks reported that “the reservation economy of the Eastern Band is in a period of strong growth.”

The casino’s economic impact extends throughout the Western North Carolina region Chief Hicks said, “boosting per capita income from 70 percent of the state average in the mid-1990’s to more than 80 percent today….”

He reported that the Cherokee Preservation Foundation, funded by gaming revenues to create new businesses and initiatives, “has contributed a leveraged impact of about $99 million for additional social improvements, environmental enhancements, workforce development, and cultural preservation in the region.”

In his Senate report, Chief Hicks noted that the greatest and most gratifying impact of gaming resources has been on tribal children, as reflected in schools and youth programs.

Cherokee Central Schools, he said, have “sunlight in every classroom, gymnasium, library and student spaces. [The school complex] features a Gathering Place, a theatre in the round for the elementary students to host cultural programs. The Gathering Place is designed in the model of traditional council houses with seven sides.”

“The classroom buildings are of similar design with interior courtyards,” added Chief Hicks, along with “a cultural arts center theatre with dance studios, an art gallery and a state of the art theatre which has hosted the North Carolina Symphony and the Atlanta Shakespeare Theatre as well as our own Cherokee cultural night for students to showcase their own talents.”

“More important is the athletic component of the school complex which was designed to address the diabetes epidemic in our community. We believe that teaching the children to control their health is an essential life lesson.”

Chief Hicks pointed to research by Duke University Medical School showing the significant impact that resources from gaming can have on the health and well-being of Cherokee children.

“… the poorest children tended to have the greatest risk of psychiatric disorders, including emotional and behavioral problems.  But just four years after the payments to Cherokee families from gaming revenues began, [there were] substantial improvements among those who moved out of poverty,” Chief Hicks reported.  “The frequency of behavioral problems in Cherokee children declined by 40 percent, nearly reaching the risk level of children who had never suffered from poverty.”

Minor crimes committed by Cherokee youth also declined and on-time high school graduation rates improved. According to Chief Hicks, “These Cherokee youth were roughly one-third less likely to develop substance abuse and psychiatric problems in adulthood, compared with the oldest group of Cherokee children and with neighboring rural whites of the same age.”

“The Duke study also found that improvements to family income improved parenting quality. The assistance from gaming eased the strain of the feast-or-famine existence too many of our families were surviving in.”

Chief Hicks told the Senators that direct investments made to tribal members saves both the Eastern Band and the Federal Government money in the long run. “[T]he Eastern Band Cherokee Tribal Government and the federal government benefit from savings in reduced criminality, a reduced need for psychiatric care, and savings gained from not repeating grades.”

Chief Hicks summed up the positive effects of gaming on the Eastern Band by saying, “Tribal government gaming has been the primary driver for our ability to address the problems in our community, on our terms, and support the culture and traditions that never left.  I can testify today that gaming has brought not only economic benefits to our reservation but also positive impacts on Cherokee life expectancy, poverty rates, educational attainment, and the physical and mental wellbeing of Cherokee children.”