Gearing up for the Cherokee Indian Fair

The team at EBCI Destination Marketing is planning another fun-filled Cherokee Indian Fair the week of Oct. 7-11, according to Howard Wahnetah at the Cherokee Indian Fairgrounds. Several pieces of the five-day event have already been put into place and activity scheduling seems to be finishing up.

Wahnetah stated that the overall theme for the Fair this year is Cherokee People: Our Legends and Tales. The Cherokee Indian Fair Committee solicited potential themes from the communities with a contest and selected this theme from the entries. The day themes remain the same as in previous years including: Parade day – Tuesday (5-10 pm), Children’s Day – Wednesday (11 am-10 pm), Elder’s Day – Thursday (11 am-10 pm), Veteran’s Day – Friday (11 am-10 pm) and Community Day – Saturday (11 am-11 pm). 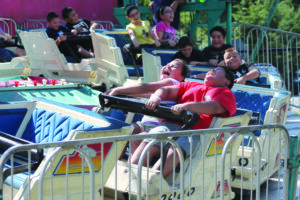 The Fair will be a “pay at the gate”, cash only event. Gate admission is $10 per day for those 7 years of age and older (there is no charge for children 6 and younger). Admission is free for EBCI tribal members.

The Cherokee Zip Line has been extended for this year’s event and promises to be a crowd pleaser. Trained technicians operate the zip line to insure safety. Last year, young and old enjoyed the rush of speeding down the line.

Nashville recording artist Kellie Pickler will headline the Cherokee Indian Fair. She is a country music singer who produced a gold record “Small Town Girl” in 2009. Since then, she has had a string of Billboard top 20 hits including a song she co-wrote with Taylor Swift, “Best Days of Your Life”. Pickler also won on the popular television show, Dancing with the Stars, in the 2013 season. She will be performing on Thursday night at the Fair. 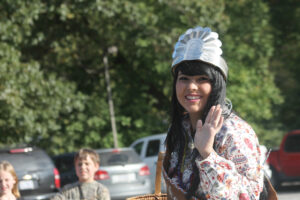 On Wednesday, Oct. 8, “Hotel California: A Salute to the Eagles” will take the Amphitheatre stage. This tribute band tours from east to west coast, performing between 150 to 200 times per year. A group of talented, professional musicians faithfully reproduce the signature style and tunes of the Grammy award winning Eagles.

On Friday, Oct. 10, a tribute to the legendary southern rock band Lynryd Skynyrd will be performed by the band “Nuthin’ Fancy: A Tribute to Lynyrd Skynyrd”. An excerpt from the band’s biography says the band “meticulously replicates the stage performance of Lynryd Skynyrd, mastering every detail from the original band’s clothing to its ripping piano and guitar solos” [2014 Facebook; Nuthin Fancy (Tribute to Lynyrd Skynyrd)].

The Agricultural Extension Office and Qualla Arts and Crafts soon will be sending out information on registration, submitting entries and community contests. Information on the parade floats is also forthcoming. Cherokee Idol and Pretty Legs will be returning to the Fair as well as many of the favorite community activities. This year, all stickball games will be played at the Fairgrounds.

The Cherokee Indian Fair Committee and the day organizers continue to work on other aspects of the Fair. The vendor registration and regulations are now available. Copies are available at the Fairgrounds. For information on food booths and other general questions about the Cherokee Indian Fair, contact Howard Wahnetah 554-6471 or howawahn@nc-cherokee.com.