The new 15,000 square feet Snowbird Youth Center opened with a ribbon cutting on Wednesday, July 16.  The facility was built on approximately 20 acrea owned by the U.S. Forest Service near Robbinsville.  Due to the lack of a suitable site for the Center on EBCI trust lands in the area, the Tribe entered into a 25-year lease with the Forest Service in November 2012.

“It is an amazing day for the community and the county,” said Wanda Blythe, Snowbird Youth Center manager.  “It is a wonderful facility.  It is simply amazing.  It is beautiful.  I am just so thrilled for these kids to have something that they can call their own.” 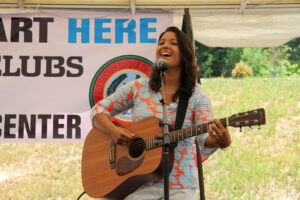 EBCI tribal member Stephanie Brown sings at the opening of the Center.

Shawn Crowe, Cherokee Teen Center, emceed Wednesday’s program and opened by saying, “For years, the small, little community of Snowbird, part of our Cherokee lands, set kind of isolated and sometimes was forgotten. Today, the future, sitting right here in this first row, have something that will help them grow and nurture them because they are the future and a big part of the Eastern Band of Cherokee Indian’s future.”

He offered the opening prayer for the event and thanked the many people involved in making the Center a reality.  Vice Chief Blythe praised the spirit of cooperation between Tribal government, the U.S. Forest Service and the community.

Principal Chief Michel Hicks said, “It is a glorious day.”

He praised the work of Tribal Council on the project.  “We can’t do anything without the working relationship with Tribal Council.” 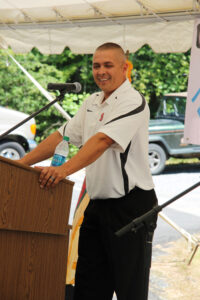 Chief Hicks also recognized the contribution that Roger Smoker made to the project.  Smoker, an EBCI tribal member from the Snowbird Community, was the person who suggested talking to the Forest Service to find suitable land for the construction of the Center.

“I want to thank you for that day that you came and made that suggestion,” Chief Hicks told Smoker as he asked him to stand and be recognized.

“It has taken many years to get this project completed, but as you can see already, it’s been well worth it,” said Hollifield.  “This celebration has been eight years in the making as far as an idea to better serve the children of this community.”

People gather inside the main room of the new Center following the ribbon cutting.

Steve Morris, Boys & Girls Clubs of America director of organizational development, was at Wednesday’s event and noted, “This has got to be one of the most beautiful spots for a Boys & Girls Clubs Youth Center in the state…it’s probably also one of the only Clubs in the state that is this close to a lake so I’m sure they’ll be some recreational activities around that.”

“On behalf of the Boys & Girls Clubs of America, I’d like to thank the foresight and work of tribal leadership in the past and the current and things they’re going to do in the future for taking care of these kids in this area.  It’s a beautiful facility.” 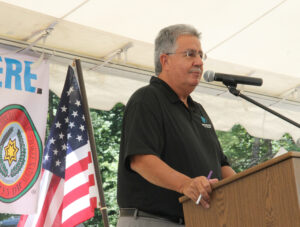 Cherokee County – Snowbird Rep. Adam Wachacha commented, “Today is definitely a day of celebration…eight years ago, this land we are standing on was just an old Forest Service road leading up the side of a mountain.  The idea of a Boys & Girls Club was only a dream.”

Fellow Cherokee County – Snowbird Rep. Brandon Jones said, “This is truly a blessing for our community and our kids.  I want to thank everyone that was involved.”

“When I was a kid, I used to hunt this very road, going squirrel hunting with my dad and my brother, and I never dreamed thirty years later that this would be here.  It’s just amazing.  I spent a lot of time here.  I grew up just over the hill…to see it where it is today is just mind-boggling.”

Many guests came to Wednesday’s event including Stephanie Bryant, the newly elected chairperson of the Poarch Band of Creek Indians, who related, “The facility is absolutely amazing.  We are actually in the process of building a new infrastructure for our children as well.  It is such an honor to be here for the opening of the facility because what better investment than in the children of our communities – the future leadership.”

Steven Westcott, U.S. Forest Service public affairs officer, told the crowd on Wednesday, “It is indeed a special day…the Snowbird Youth Center and the programs that it will offer will help young people of the Eastern Band in the Snowbird Community in a number of ways.  The Forest Service is proud to be a part of this special project.”