These PGA Professionals are men and women that work at thousands of golf facilities and retail stores across the United States.  They are generally who you would go take a lesson from.  The PGA is the largest sport organization in the world with over 28,000 members in the US.  Members are the experts in the game and business of golf including running golf courses and growing the game. 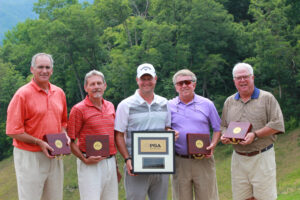 “I think the event was a huge success,” said Ott.  “We had about two-thirds of the teams from outside of the local market, players came from east of Hickory or South Carolina.  From a market standpoint, it was very good; about half the field had never played the course before.  So, for them to be able to get around the golf course and take in what Cherokee has to offer and what we have to offer here at Sequoyah National.”

Carr Crowe related, “We had a great turnout with a full field and everybody was very pleasant.  The majority of the crowd was from east of Hickory, so with the course conditions, the area, the scenery and everything, it was a really good change from what they are used to.” 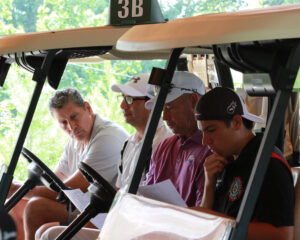 While warming up before the start of the tournament, Bud Smith commented, “It’s encouraging to see this type of event coming in.  It’s what we need to become a better golf course.”

Competitors were greeted with an image of PGA Tour professional, Keegan Bradley, on the National Car Rental “Go Like a Pro” mobile experience.  The “Go Like a Pro” mobile experience made a unique visit to the western North Carolina mountains specifically for the Sequoyah National tournament. It provided competitors of this tournament an opportunity to experience amenities usually reserved only for PGA Tour players.  Players had the opportunity to have their clubs re-gripped, take a look at a replica locker room and set of Keegan Bradley golf clubs, demo Cleveland wedges, and analyze their swing via Trackman.

When asked why they picked Cherokee, Ron Schmid, executive director of the PGA in the Carolinas said, “We’ve heard great things about Cherokee.  Our (former) tournament director had come up to the Casino, spent a little time up there and really enjoyed it.  He said he heard some great things about the golf course here.  So, we put the two things together between having a great golf course and having the opportunity to spend a little time in the casino.  The two (go) very well together, so it makes a great opportunity.”

“We’re excited to be here.  One thing Cory and I’ve heard from a lot of our people is when they look around, it doesn’t matter where they look, and they see this beautiful view.  Every hole is a magnificent view; it’s truly a breath taking experience.”

Vice Chief Larry Blythe receives a plaque from the PGA Carolinas Section executive director Ron Schmid on behalf of the Eastern Band of the Cherokee Indians.

The first day of the tournament consisted of a Shamble, also known as a Texas Scramble, where all team members tee off, and the most desirable shot is selected.  From that point, each competitor plays his/her own ball.  The second day, after all members had become familiar with the course, the teams played two best ball where each team member played his/her own ball and counted their two best scores.

After the tournament, participant Curtis Wildcatt said, “It’s a pretty interesting tournament, seeing all these professional players come up, all the regional players.  I think it’s really going to give the golf course some great exposure.  Most of the feedback is pretty positive, everybody likes the vistas. Hopefully, have more like that in the future.

We were a makeshift group as our pro was assigned to us. He wanted to play and needed a team, so we threw it together into a last minute thing. I think we finished 15 under, probably about middle of the pack but it’s still pretty fun.  Seeing a high caliber player like that execute, he carded a 2 on hole number one, which is an albatross on a par five.” 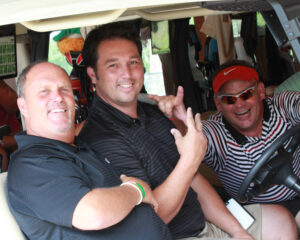 Will Cauble and Toby Dietz get ready to take on Sequoyah National.

Visiting competitor Will Cauble, from Hickory, said, “The tournament was fun.  I’ve never played up here, it’s a great course, but it’ll wear you out.  It’s up and down, you better be in pretty good shape in order to play.  It’s a beautiful golf course, it’s a neat place. The whole area’s neat.  The workers here, the professionals here, they are all good people.  We’re already talking about coming back.  We’ll come back, play golf, and probably stay over at the casino.  It’ll be a 24-hour party.”

TT Taylor said, “It’s exciting to play in something like this.  I was little nervous at first but I was able to cope with it and got a good round going. We mellowed out and had a good round today. I played well, I shot 75 today.  Just made a few birdies but had a solid round.”

Ott added, “I played well, I hit the ball well.  I was pleased but this golf course, if you make a bad swing it will come back to bite you and it bit me three times.”

The team of Duane Page, Scott Siewart, Don Stephenson, and Chris Wilmont finished atop the leader board at the conclusion of the event.

Coming off the heels of such a great event, Sequoyah National intends to keep the momentum churning through the remainder of the season.  Ott stated, “I’m hoping we will be able to hold this event again.  It was a success, not only for us at Sequoyah National but also for the Tribe.  I think it was a really good showing for what we have to offer in the area.”

“I feel very good where we’re continuing to grow and continuing to progress.  We have some really good events coming up, the Sequoyah Classic for the Cherokee Children’s Home, and we have the Madison Hornbuckle Aug. 9 through the Chief’s office.”