Patrick Nelson Lambert, Randall Crowe, and Kacey Jo Tilley are interning this summer at the Cherokee Tribal Court.  Below are their bios.

Patrick Nelson Lambert completed his first year of law school at Charlotte School of Law. He is of the Birdtown Community and is the son of Patrick and Cynthia Lambert. His wife, Kimberly Lambert, is living in Charlotte where she is a nutritionist for Mecklenburg County WIC Department.

Nelson received his bachelor’s of arts degree in english-literature from the University of Tennessee – Knoxville. In his first year in law school, Nelson achieved the honor of Dean’ List for the fall and spring semester. He is the founding vice-president of the Native American Students Association (NALSA) at Charlotte Law. 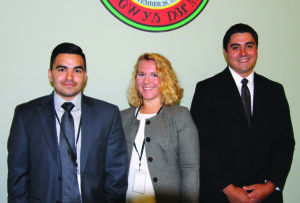 Nelson was selected to be the Area 5 representative for National NALSA, which covers the entire eastern region of the U.S. Nelson made the Trial Advocacy Honor Board, which is Charlotte Law’s Trial team. He is also the secretary of the Employment Law Society.

When asked how he is able to achieve all of these honors while maintaining such a high GPA, Nelson said, “Home is my motivation, from the elders, to the children in the Kituawah Academy. My people are the reason I went to law school. I will come back home when I am finished with school and do my part to help strengthen and improve everyone’s way of life. I push myself so that I can inspire others to follow in my footsteps and to raise the bar higher. Also, my wife Kim keeps me grounded. Without her in my life, law school would have consumed me. She is my life balance.”

Randall Crowe was born and raised in Cherokee.  He attended Cherokee Elementary and Smoky Mountain High school.  In high school, he was a representative for the Wolftown community on the Junaluska Leadership Counsel.  After high school, he joined the Navy and served four years on the USS Enterprise as an Aviation Ordnance Third-class petty officer.  He received an unprecedented four-month early release from active duty as a reward for his commitment to receiving an education while serving.

Two weeks after being released from active duty, he started school at Virginia Commonwealth University in Richmond, Va. where he was a founding member of the Native American Student Association at VCU and a member of the Student Veterans Association.  He finished his bachelor’s degree in 3 ½ years and majored in homeland security and emergency preparedness, and criminal justice.  He has recently completed his first year at Charlotte School of Law where he is also the founding Treasurer of the Native American Law Student Association.

While in college, she was an active sister of Phi Mu Fraternity and was also a resident assistant in Blue Ridge Hall and Walker Hall. At NC Central School of Law, Kacey is a member of the pro-bono program and plans to participate in Durham County’s ‘Teen Court’ upon returning to Durham. She is also a lifeguard and lifeguarding instructor at NC Central’s campus recreation center and teaches swimming lessons in her spare time. Kacey is in the top third of her class at NC Central and upon her graduation in 2016, she hopes to pursue a career with the U.S Department of Justice Environmental and Natural Resources Division.