The Cherokee Nation held its annual volunteer firefighters ceremony at the Hard Rock Hotel & Casino Tulsa and distributed $3,500 checks to each of the departments that serve within the tribe’s jurisdiction. Rural fire departments rely heavily on good Samaritans, fundraisers and membership drives to keep their stations operating.

“In emergency situations, these brave men and women step up to protect our homes, our property and even our lives” said Cherokee Nation Principal Chief Bill John Baker. “Volunteer firefighters are often the backbone of our rural communities, and that is why it is so important for the Cherokee Nation to support them by making this financial commitment. Our partnerships with volunteer fire departments will positively impact the lives of all citizens in the Cherokee Nation’s jurisdiction.” 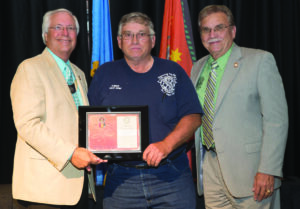 In the past year, Cabin Creek firefighters built an additional fire station and upgraded their vehicles, which in turn significantly lowered their Insurance Service Organization rating, lowering homeowner insurance rates for all their citizens. The department held firefighting training courses with area volunteer stations, and the upgraded training now allows them to assist with emergency calls as emergency medical responders and paramedics.

The 14-member station was also quick to respond to the Spavinaw tornado. Arriving right after it hit, they were in service until everyone was located and safe.

“It’s a great honor to be recognized as the Fire Department of the Year, but the bottom line of it is that it takes a team effort,” said Jason Miller, Cabin Creek Fire Department fire chief. “Having the Cherokee Nation’s support is absolutely unbelievable. They support their communities just like a fire department does, and they have our backs as we are out there having our communities’ backs.”

Welling Volunteer Fire Department responded to about 400 calls and covered 199 square miles of Cherokee County this past year. The 25-member staff also assisted with water rescues on the Illinois River and public safety presentations for local schools, and they provided medical standby for athletic events at local schools and youth camps. During two of their water rescues, the crew had to wade through rising water to rescue victims and safely remove them before their homes flooded.

“It’s an honor to receive this award. The Cherokee Nation funds allow us to purchase equipment so much quicker, rather than waiting until we hold fundraisers,” said Martin Webb, Welling Volunteer Fire Department fire chief. “Last year we were able to buy a new brush pump for one of our vehicles.”