The Lady Braves pose with the trophy they received for winning the Holidays on the Hardwood Tournament. They defeated Robbinsville 78-58 in the championship game on Monday, Dec. 30 at the Charles George Arena. (SCOTT MCKIE B.P./One Feather photos)

The Cherokee Lady Braves (9-1) defeated the Robbinsville Lady Black Knights 78-58 to win the Holidays on the Hardwood Tournament at the Charles George Arena on Monday, Dec. 30.  Cherokee led by as many as 40pts in the second half.

Avery Mintz, Tournament MVP, goes up for a layup during Monday’s game against Robbinsville.

Avery Mintz led the Lady Braves in the championship game with 17pts followed by Kendall Toineeta with 16 and Le Le Lossiah with 14.  Mintz was named the Tournament MVP and both Toineeta and Lossiah were named to the All-Tournament team.

Mintz also had 8 rebounds and Toineeta had 7 assists on the night.

Cherokee jumped out early in this one and led 31-13 after the first period and 54-24 at the half. 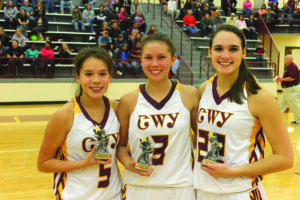 Cherokee’s Le Le Lossiah (#5) and Kendall Toineeta (#3) were named to the All-Tournament team for the Holidays on the Hardwood Tournament and Avery Mintz (#22) was named Tournament MVP.

The Braves (4-6) lost both of their games in the tournament.   Erwin defeated Owen 91-65 on Monday, Dec.30 to win the boys tournament. 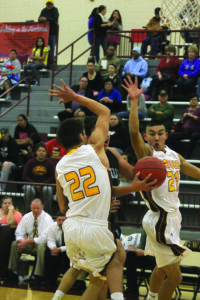 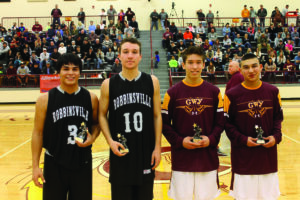 Robbinsville’s Cruz Galaviz and Cole Huskey were named to the All-Tournament team along with Cherokee’s Dustin Johnson and Jesse Toineeta.

Cherokee’s Jesse Toineeta and Dustin Johnson were named to the All-Tournament team along with the following: