One Good Story, That One is Native humor at its finest

Nearly every word on every page of Thomas King’s One Good Story, That One is carefully crafted and meticulously chosen, but the beauty of it is that most of us sitting around the imaginary campfires or the cozy, familiar front porches that his narrative style evokes in this collection of tales will not realize it until we have reached the end of each story. This is because King is a master of economy when it comes to using language. The beguiling simplicity of his storytelling masks at first glance profound messages of historical trauma, the inevitable syncretism that occurs when two cultures are brought together, and humor that ranges from raucous punch lines to mischievous winks, some of which can catch the unwary reader by surprise, perhaps even a line or two later into the story. 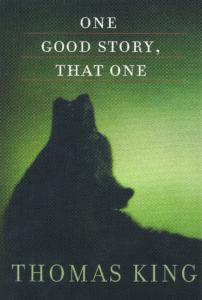 King, born in 1943, is a native of Sacramento, Calif., but he is a citizen of both the United States and Canada. His heritages include Cherokee, Greek, and German-American, but it is his indigenous heritage and his knowledge of Canada particularly that figure most prominently in the themes of his stories. His use of the linguistic cadences of Canada’s Native people and his knowledge of the land color his stories marvelously.

One of his great loves is the trickster tale, and coyote makes an appearance in several of the stories in this collection. Life on the reserve, as reservations are called in Canada, is also an important topic in King’s stories. The relationships between fathers and sons is painfully but eloquently portrayed in “Trap Lines,” which upon completion I labeled instantly with the book’s title – one good story, that one. Ironically, the first story in the book, which actually does bear that title, is my least favorite and almost made me dread reading the rest of what would turn out to be a great source of entertainment on several nights. I am very glad I did not judge the book by its first story, whose broken English style became a bit much for me to stomach after a while. The story is not without merit; it is just not as engrossing as the others.

One of my favorites is definitely “Borders,” which is told through the eyes of a young boy but reveals mainly his mother’s relationship with her daughter who has left the reserve for Salt Lake City, and most spectacularly, his mother’s pride and insistence on her Blackfoot nationality and sovereignty.  This creates, at first disturbing and then later almost comical, conflicts for her and her son when they try to cross from Canada into the United States.

Indeed, humor is King’s treasured and trusty tool, lightening the load of histories too heavy to carry without it. As a reader, I reflected on real events that will forever haunt the American continent and was reminded to, as one of his nameless narrators tells coyote, “Just remember how that story goes” in “A Coyote Columbus Story.” In the midst of it all, though, I enjoyed more than a few good chuckles and even had to put the book down at times to get out my laugh. This is Native American humor and storytelling at its best.