Kituwah to be protected “in perpetuity”

Cherokee people from all three tribes came together at Kituwah a few years ago for the Tri-Council event. The EBCI Tribal Council has passed legislation that will protect the site “in perpetuity”. (SCOTT MCKIE B.P./One Feather photos)

Kituwah is the “The Mother Town of the Cherokee” and is a sacred site that has existed for thousands of years.  Now, it will be protected “in perpetuity”.

Tribal Council passed legislation unanimously recently that states “there shall be no alteration to Kituwah and the Council hereby supports the protection and preservation of said property in keeping with the spiritual integrity of Kituwah.” 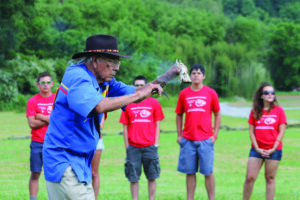 EBCI Beloved Man Jerry Wolfe purifies members of the Remember the Removal Ride this past summer at Kituwah.

Renissa McLaughlin, Kituwah Academy manager and author of the legislation, said, “This legislation was long overdue, and we celebrate the unanimous decision in support of Kituwah Mound.  There are many, maybe not all, but many EBCI members that are aware and take responsibility for the sacredness of Kituwah Mound.”

She further stated, “We wear the same clothes as everyone else.  We speak like everyone else, but the embers in our hearts are being stoked each day and a fire is building inside.  We are aware.  We are responsible, and we are, with dignity, taking action to honor our elders.”

McLaughlin said the Cherokee Cultural and Historic Sites Preservation & Development Committee reviewed the legislation and made revisions prior to it being submitted.  “Our intent was to keep development at bay at Kituwah Mound for perpetuity.”

As part of a presentation on Kituwah, McLaughlin wrote, “Kituwah is the original Mother Town of the Anikituwagi or Cherokee people.  This is the place where our grandparents received the Laws of the Seven Clans and the Sacred Fire, both given to us by the Creator.  This means that Kituwah was given to us by God.”

“Kituwah Mound was built with the Sacred Fire in its center.  It is scientific fact that the ashes of the original fire are still present.  The sacredness of Kituwah extends not only to the mound itself, but the associated village that occupied the entire valley.”

The EBCI Tribal Historical Preservation Office released the following statement on Kituwah’s protection, “The EBCI THPO is an active member of the Cherokee Cultural and Historic Properties and Development Committee. This committee is able to review and recommend approval of land use and development of the tribe’s designated historic sites. However, the responsibilities to this committee does not negate our cultural resource consultation and review oversight as per federal cultural resource legislation.  The EBCI THPO remains the federal land managers as per cultural resource law for the tribe. The THPO will continue to be an active member of the Cultural and Historic Properties and Development Committee, and we will continue to be good stewards of Kituwah and other tribal historic sites.”