CHRISTMAS MESSAGE FROM THE GENERAL MANAGER

Tommy Lambert, General Manager of the Cherokee Boys Club, would like to wish everyone a Safe and Happy Christmas and New Year.  Sometimes the commercial aspect of the season causes additional stress and we tend to forget the true meaning of Christmas.  The following is taken from the King James Version of the Bible, Luke Chapter 2, Verses 1-20:

And it came to pass in those days, that there went out a decree from Caesar Augustus, that all the world should be taxed. And this taxing was first made when Cyrenius was governor of Syria.  And all went to be taxed every one into his own city. And Joseph also went up from Galilee, out of the city of Nazareth, into Judaea, unto the city of David, which is called Bethlehem; because he was of the house and lineage of David: To be taxed with Mary his espoused wife, being great with child.

And so it was, that, while they were there, the days were accomplished that she should be delivered. And she brought forth her firstborn son, and wrapped him in swaddling clothes, and laid him in a manger; because there was no room for them in the inn. And there were in the same country shepherds abiding in the field, keeping watch over their flock by night.

And, lo, the angel of the Lord came upon them, and the glory of the Lord shone round about them: and they were sore afraid. And the angel said unto them, Fear not: for, behold, I bring you good tidings of great joy, which shall be to all people. For unto you is born this day in the city of David a Saviour, which is Christ the Lord. And this shall be a sign unto you; ye shall find the babe wrapped in swaddling clothes, lying in a manger.

And suddenly there was with the angel a multitude of the heavenly host praising God, and saying, Glory to God in the highest, and on earth peace, good will toward men. And it came to pass , as the angels were gone away from them into heaven , the shepherds said one to another, Let us now go even unto Bethlehem, and see this thing which is come to pass , which the Lord hath made known unto us. And they came with haste, and found Mary, and Joseph, and the babe lying in a manger. And when they had seen it, they made known abroad the saying which was told them concerning this child. And all they that heard it wondered at those things which were told them by the shepherds. But Mary kept all these things, and pondered them in her heart. And the shepherds returned, glorifying and praising God for all the things that they had heard and seen, as it was told unto them.

The Boys Club will be closed Wednesday, Dec. 25 and Wednesday, Jan. 1.  The Club does not follow the same schedule as the Eastern Band of Cherokee Indians.  Some of the Club departments may close as an Annual Leave Day, however.  If you need assistance, please call the switchboard at 497-9101, someone will assist you or you can obtain a phone number for the various departments and services.

Students of Cherokee Central Schools will return to school on Monday, Jan. 6 instead of Friday, Jan. 3 as previously noted.

CONGRATULATIONS TO THE WINNER OF THE STICK BALL RAFFLE 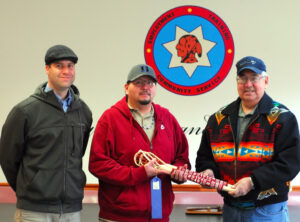 Congratulations to Noel Bigmeat, winner of the beaded stick ball sticks donated by Wilbur Paul.  The proceeds from the raffle will go into the construction fund for the new Children’s Home.  Mr. Paul also donated other items that he made in addition to the sticks. Those winners include:  Jack Bradley, Quincy Watty, Dee Dee Bradley, Susie Roach and Debb Bradley.  If you have not already received your prize, contact Monica Lambert at 497-5009. This raffle raised over $1,350.

Congratulations to Trista Welch for receiving her Master’s Degree in Business Administration from Florida State University at their graduation ceremony this past weekend.  Trista is the Manager of the Club’s CBC Printing Department.  We are very proud of Trista and her accomplishments!

Congratulations also to Damian Solis who graduated with a Master of Science degree in Exercise Science of Health Promotion from the California University of Pennsylvania on Dec. 13.  Damian is a part-time Bus Driver with the Boys Club.  We are proud of Damian and his accomplishments.

The Boys Club still has a few more 2014 Date Logs left!  If you would like to have a calendar for the Year 2014, come by the Information Window at the Club.