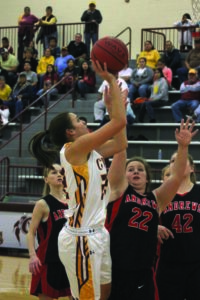 Defense was the name of the game for Cherokee as they held the Lady Wildcats to just 5 points in the first half.  Again, Cherokee won the game of possession with 21 steals compared to Andrews’ 0.  Kendall Toineeta led with 6 steals for the Lady Braves followed by Bree Stamper with 4.

Cherokee dominated the first half leading 25-2 after the first period and 45-5 at the half.  Cherokee’s bench got a lot of play in this game.  The second half was more of the same with the Lady Braves outscoring Andrews 34-22.

Avery Mintz led Cherokee with 19pts followed by Toineeta and Peri Wildcatt with 16 each.  As a team, Cherokee shot 51 percent compared to Andrews’ 24 percent.  Toineeta, who leads all of WNC in assists, had 6 in this game. 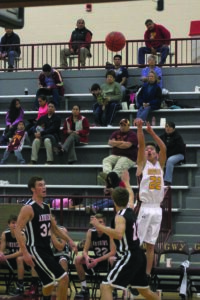 Cherokee’s Dustin Johnson (#22) shoots a three-pointer during Friday’s game. He led Cherokee with 24pts including going 4 of 8 from three-point land.

The Braves won the defensive game and thus won the game.  Cherokee had 20 steals compared to Andrews’ 0 with Darius Thompson and Raven Frankiewicz, who leads all of WNC with steals, leading the way with 5 each.  Frankiewicz also had 7 rebounds. 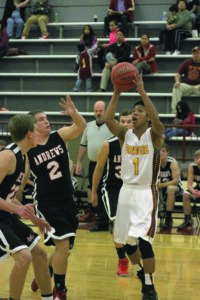 This game started relatively close with the Braves holding a small 16-11 lead after the first period, but they blew up in the second period outscoring Andrews by 17 to take a 47-25 lead into the locker room.  Andrews would come back some in the third period outscoring Cherokee by 3 (14-11), but a solid 19-5 fourth period sealed the win for the Braves.

Dustin Johnson poured in 24pts to lead Cherokee.  As a team, Cherokee shot 49 percent from the field while holding Andrews to 32 percent.