Rapper…actor…entrepreneur…motivational speaker…all of these words describe Litefoot.  The Cherokee Nation citizen whose real name is Gary Davis brought a positive message to the Cherokee Central Schools on Tuesday, Dec. 10 and Wednesday, Dec. 11. 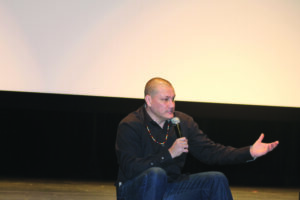 On Tuesday, he spoke to students at the Cherokee Elementary School and on Wednesday he spoke during the day to students at Cherokee Middle and Cherokee High School.  On Wednesday night, he gave a community presentation in which the current president and CEO of the National Center for American Indian Enterprise Development (NCAIED) spoke on topics ranging from substance abuse to entrepreneurship in Indian Country.

“It’s crazy because people say, ‘how did the rapper…how did the actor go from that to being the CEO of this organization.’”

He related that American Indians have always been entrepreneurs and referenced the ancient Cahokia Mounds near St. Louis, MO which was the largest city and trading area on Earth at that time.  “You’ll see that our people have always understood the concept.   You talk about business in Indian Country and some think it’s something that we’re just learning about and that’s just absolutely not the case.  We’ve done business for a long, long time and we did business with each other.”

Litefoot added that tribes today do not work together as well anymore.  “We’re not seeing that cohesion.  We don’t pool our resources.  You don’t have this tribe working with that tribe and that tribe.  It’s definitely not what people believed who went to Cahokia.”

“For us to progress as a people…our young people are also going to have to understand that business is something that is not out of their reach.”

Speaking of reach, several years ago he set out to reach as many American Indian communities as he could.  After garnering sponsorships from the Seminole Tribe of Florida, the Mashantucket Pequot Nation and others, he set out on the Reach the Rez Tour which saw him travel 54,000 miles and visiting 211 communities.

“One time around the Earth is 27,000 miles, and we did that twice.  It was absolutely worthwhile.  It did a lot of good.”

He showed a nine-minute video of highlights of the tour during Wednesday night’s presentation.

Litefoot said reaching out and finding your true purpose in life should be everyone’s goal.  “We can only go so far, but when we look into the Creator, we can take it to places no one ever thought possible.  I’ve been pretty blessed.  When you are blessed to be able to do what you were put on this Earth to do, there’s a sense of completeness and a sense of purpose.”

He did emphasize to the youth though that you shouldn’t compromise your values, traditions or culture just to get where you want to be.  He told a story of being offered an album deal in Chicago early on in his rap career, but the label told him he couldn’t mention American Indians at all in his music.

Litefoot politely pushed the contract back across the table to the executive and said, “Too many of our people are where we are today because of deals like this.”

He went home and started his own label – Red Vinyl Records.

Litefoot has been able to accomplish many of his goals and dreams, and he related that hard work and perseverance are keys.  “Anything and everything is possible with the Creator, but it won’t fall in your lap.  People want the blessings, they just don’t want to walk down the road to get them.  You have to do the work to get the gift.”

Along with hard work, he says positive thinking is a key.  “Dark will never make dark go away,” he said referencing some who think alcohol and drugs can make bad problems go away.  “Alcohol and drugs look like light, but things just get darker.”

Litefoot related that during his Wednesday day session, he asked the students how many of them had been told they couldn’t achieve a goal or dream and an overwhelming majority raised their hands.  “We are good enough.  We are capable.  Our young people need to hear that.  If you can envision it, you can achieve it.”