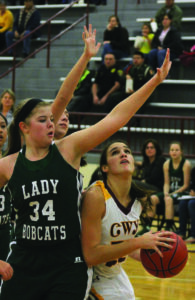 One of the basic tenets of the game of basketball is that you have to have the ball to score.  The Lady Braves made sure the Lady Bobcats didn’t have the ball much in Tuesday’s game as Cherokee had 35 steals to Blue Ridge’s 0.  Avery Mintz had 7 of those steals followed by LeLe Lossiah and Kayla Pheasant with 5 each.

Kendall Toineeta led Cherokee with 16pts followed by Mintz with 13 and Taran Swimmer with 10.  Cherokee jumped out early in this game and led 21-4 after the first period.  Blue Ridge didn’t score their first point until just before the period ended.

The Lady Braves led 41-7 at the half and then outscored the Lady Bobcats 36-9 in the second half to take the big win. 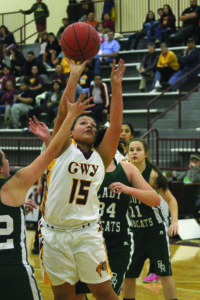 Cherokee’s Blake Wachacha (#15) goes up through several Blue Ridge defenders for a shot. 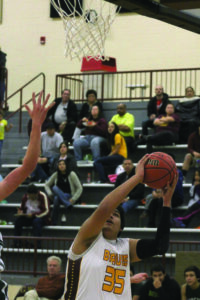 Cherokee’s Eli Littlejohn (#35) drives hard for the basket. He ended with 9 points on the night.

This game seemed like it would be close in the beginning and Blue Ridge actually led 18-13 after the first period.  But, Cherokee dominated in the second period outscoring the Bobcats 25-7 to take a 38-25 lead into the locker room.  The Braves never looked back and outscored the Bobcats 41-26 in the second half.

Much like the girl’s game, this game was one of possession.  Cherokee had 28 steals to Blue Ridge’s 3.  Raven Frankiewicz and Jesse Toineeta led the way with 6 steals each. 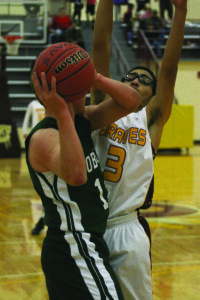 Frankiewicz also led the Braves with 16pts and 13 rebounds.  He shot 7 of 10 from the floor for a game-high 70 percent field goal percentage.  Overall, Cherokee shot 41 percent from the field to Blue Ridge’s 34 percent.