CHS honors elders at “Everyone has a Story” program

On Friday, Dec. 6, Cherokee High School honored five of its established citizens in the Cherokee community. Honoring our Elders is held every fall. 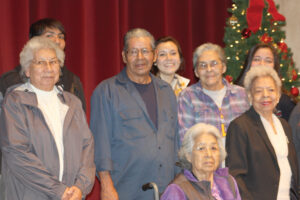 This year five community members were interviewed by students and staff. The theme for this program has always been “Everyone has a Story.”

Shawn Crowe narratied the elders’ stories each year. The JROTC opened the program by posting the colors. The cultural singers recited the Pledge of Allegiance and sang America in Cherokee. Richie Sneed led the Invocation.

The elders were Sarah Catolster, Mary Fuller Lambert, Garfield Long, Sr., and Mary Ellen Littlejohn Queen. A memoriam was given for Jesse Toineeta, a former employee of the Cherokee School System.

Sarah Catolster worked for the Qualla Arts and Crafts. Catolster worked for the Community Action Program under Savannah Bigwitch. She held other smaller jobs before she went to the Cherokees. Sarah worked for the Cherokees twenty-seven years before retiring. She went to the fifth grade in school. She encouraged and taught herself many skills to be a successful worker. Sarah has served on the VOC Committee for twenty-seven years. She advises the youth “to think of the right things to do for yourself and never give up.”

Mary Fuller Lambert was born to Jessie Wolfe of Cherokee and Richard Fuller of Tomah, Wisconsin. Lambert is one fourth Laguna Pueblo. Her grandmother, Mary B. Wolfe, was a full-blooded Laguna Pueblo from New Mexico. She enjoys listening to country and western songs. Her favorite song today is “Go Rest High on the Mountain” by Vince Gill. Being a true Cherokee Braves fan, she attended almost all of Cherokee’s ball games. Many people know her as Granny Mary. Her advice to the younger people is “stay in school, keep your brain smart, and keep away from drugs.”

Garfield Henry Long, Sr. was born to Posey Long and Bessie Catolster. Long enjoyed playing the real game and the roughest sport there has ever been which is Cherokee Stickball. When asked if he was a really good stickball player, he said he was “the fastest monkey on the team.” Around 1958, he received his first TV. Long said, “I couldn’t see much of it because of the snow. There was so much snow on the TV, you couldn’t see what was on it.” Once the picture was cleared up, he enjoyed cowboy and Indian shows. His advice to the young people is “stay out of trouble, and make something of yourself, stay in school, attend church, and do not do drugs or alcohol.”

Mary Ellen Queen is the daughter of Guy Littlejohn of the Soco community and Katie Calhoun of the Big Cove community. She was born at the old Cherokee Indian Hospital. She was raised in a Christian home; her favorite song is “God Be With You.” At first she attended Straight Fork Baptist Church, and she later attended the Holiness Church. As Queen grew up in a basket making family, she learned to make baskets. She was ten years old when she made her first basket. Later, she made a basket that went all the way to Washington, D.C.

Queen has had many jobs. Along with babysitting, other work experiences include working in restaurants, the Cherokees, and the White Shield. One day while she was in Cherokee, a couple approached her and asked her if she would be interested in babysitting. This couple was from Tahlequah, Oklahoma. She decided to try it and went to babysit in Oklahoma. She said it was too desolate and lonely out there so she decided to come home. Queen’s advice to the youth is “go to school and get an education, then work every day of your life.”

A memoriam was held for Jesse Toineeta, a former employee of Cherokee Central Schools for eleven years. Jesse was born in the Big Cove community on September 3, 1946. Toineeta came from a large family of eleven siblings. His four brothers were Jimmy, Johnny, Joe, and Charlie. His seven sisters were Frances, Georgie, Patsy, Tinsey, Gail, Brenda, and Barbara. Toineeta and his family lived in a frame structure house in Sherrill Cove until he was 12 years old. Then the Toineeta family moved to Straight Fork. As a young boy, he enjoyed hunting and fishing. His sister, Gail, remembered a day when he caught one of the biggest fish in the river. Gail remembers Jesse walking up and down the Straight Fork Road all day showing off his big fish to everyone who was on the road. He was married to Betty Jo Shell for forty-three years. Toineeta passed away on August 28, 2013. His co-workers described him as unique and as a dependable worker and a good friend. He knew everything about trout fishing, and he had a big heart. As a tribute to him, a moment of silence was held and student, Leo Pete, played Taps in tribute of his military service.

Cherokee High School wants to thank all the family members and community members who attended this program.