Cherokee Nation citizen nominated for Under Secretary of the Army

Brad Carson, a Cherokee Nation citizen, was nominated by President Barack Obama on Thursday, Nov. 21 to the position of Under Secretary of the Army.  Carson is currently the General Counsel of the Army, a position he has held since Jan. 17, 2012. 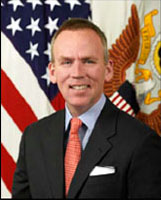 Cherokee Nation citizen Brad Carson has been nominated to the position of Under Secretary of the U.S. Army. (Photo courtesy of DOD)

Carson represented Oklahoma’s 2nd congressional district in the U.S. House of Representatives for two terms (2001-2005).  A graduate of Baylor University and the Oklahoma College of Law, he also studied in Oxford, England as a Rhodes Scholar.

Cherokee Nation Principal Chief Bill John Baker stated, “I applaud President Obama for nominating Brad Carson to this post and hope the appointment is quickly approved by the U.S. Senate. Brad is a Cherokee citizen and has committed his life to one of our Cherokee values: serving people. As a U.S. Congressman he served the people of Oklahoma’s second district, as a CEO he served Cherokee Nation Businesses and the Cherokee people, and as military veteran, he served his country with valor during the Iraq War. Brad is a true legal scholar and given his diverse and expansive background, he will be a champion for our American military in his role as Army undersecretary.”