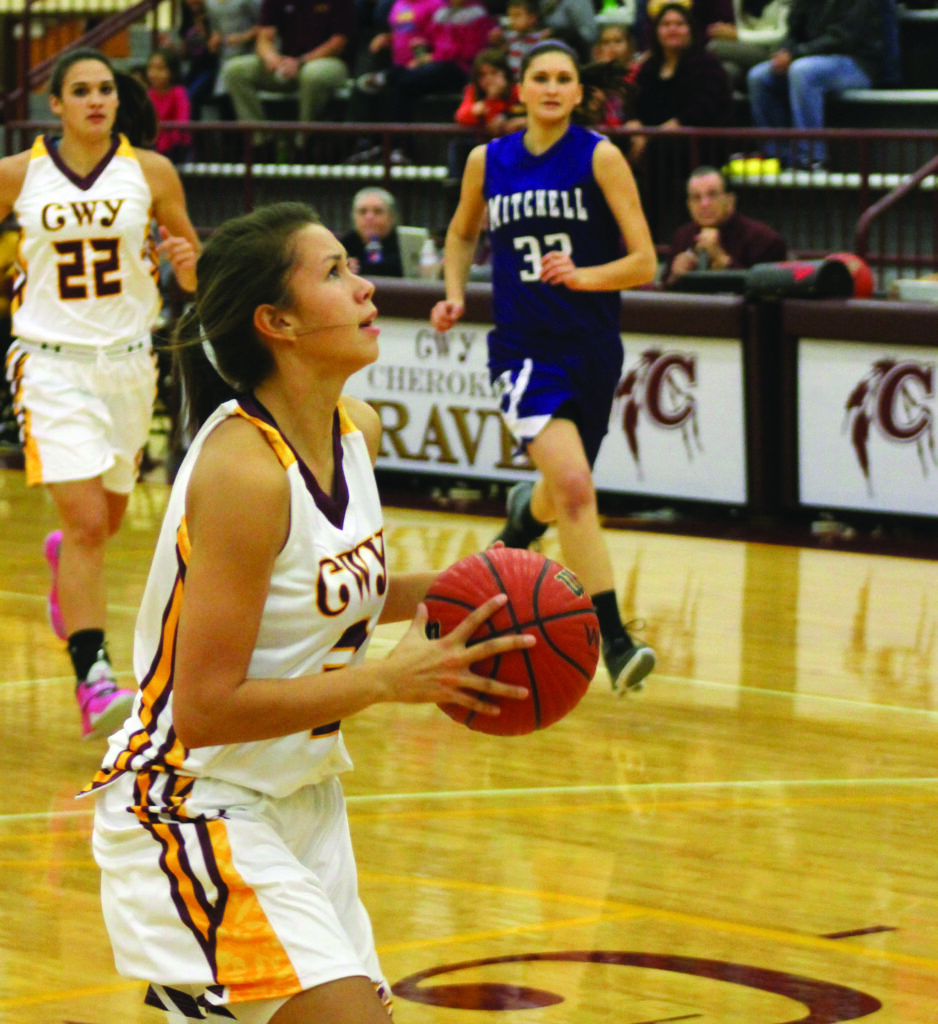 Cherokee’s Kendall Toineeta goes up for a shot in the first period of Friday’s game against Mitchell. Later in the half, she scored her 1,000th point as a Lady Brave. (SCOTT MCKIE B.P./One Feather)

It was a night of accomplishments in the Charles George Arena on Friday, Nov. 22 as both the Braves (1-1) and Lady Braves (1-1) defeated Mitchell and Kendall Toineeta scored her 1,000th career point as a Lady Brave.  The Lady Braves destroyed the Lady Mountaineers 90-32 and the Braves won a close one 86-80. 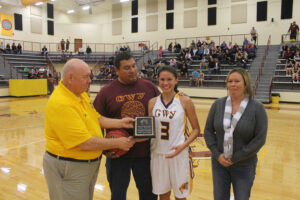 Cherokee athletic director Willis Tullos (left) presents a plaque to junior Kendall Toineeta (2nd from right) on Friday, Nov. 22 moments after she scored her 1,000th point as a Lady Brave as her parents Bruce (2nd from left) and Sunshine Toineeta (right) look on.

Toineeta achieved the milestone in the first half, and the game was stopped as Cherokee athletic director Willis Tullos presented her with a plaque.  She ended the game with 22pts.

Avery Mintz led the Lady Braves with 25pts as Cherokee jumped out early in this game leading by a whopping 36-2 after the first period and taking a 57-15 lead into the locker room.  The second half was more of the same as they outscored the Lady Mountaineers 33-17 to take the big win.

Cherokee’s Avery Mintz (#22) shoots a jump shot in the first half of Friday’s game. She led the Lady Braves with 25pts.

The Braves pulled out a six-point win in a game that was tied until the last few minutes.  Mitchell jumped out to an early 26-19 lead after the first period and took a 46-41 lead into the locker room.  The Braves outscored the Mountaineers by 10 (21-11) in the third period to take a 62-57 lead into the final period. 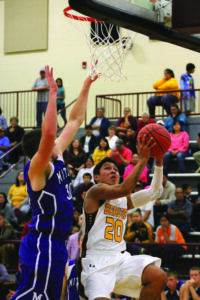 Cherokee’s Darius Thompson (#20) goes around Mitchell’s Austin Mask (#30) for a layup. He scored 16pts on the night.

The Braves led by as many as ten in the fourth period, but Mitchell tied the game with a little more than three minutes left when Cherokee pulled away for the win.