An exhibit on the history of the Eastern Band of Cherokee Indians and their language and culture opened last week at the Cherokee Central Schools.  “Understanding our Past, Shaping our Future” opened with a reception at the Chief Joyce Dugan Cultural Arts Center on Thursday, Nov. 14. 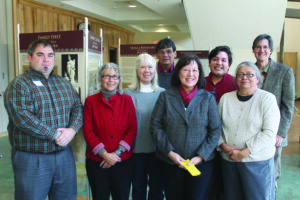 “There’s such an emphasis on Cherokee culture and life and language within the community, but sometimes it wasn’t accurately conveyed so this idea came together of having an exhibit that brought a lot of ideas together and could be placed outside of the key cultural centers,” said Anna Fariello, exhibit curator.  “This will be placed at schools, at the Blue Ridge Parkway Visitor Center and other places where outsiders don’t have to make a commitment to come and learn about the community.  It is a museum-without-wall concept.”

The project, funded by the Institute of Museum and Library Services, is a partnership between the Eastern Band of Cherokee Indians, Southwestern Community College, Cherokee Central Schools and Western Carolina University.

“When we started out, we just had an idea of an historical timeline type exhibit, and the team just got very involved in wanting to convey something that is stronger than that not just do a simple history,” said Fariello who said the project has taken three years.  “So, instead, we spent a lot of time talking about how to bring about a true Cherokee voice.”

Fariello said that, at that point, they brought in fluent Cherokee speakers and recorded them and asked them their ideas and thoughts on various historical photos and items.  “We wanted to not only get the ideas from the native speakers, but in the language.”

Roseanna Belt, an EBCI tribal member and director of the WCU Cherokee Center, helped Fariello find resources and people to speak with for the project.  “I find that she (Fariello) is very concerned that she not just barge in and make assumptions but that she talk to the right people.”

“In addition to the books she’s written about Cherokee art, this is certainly a comprehensive look at Cherokee history, and I’m happy to have any affiliation with it all.  She’s worked really hard.”

Jeff Marley, SCC Heritage Arts Department chair, served as an evaluator on the project and said that SCC is using the exhibit to bridge gaps through art.  “We give the students an assignment to look at the exhibit and then come back and draw or write their interpretation of it so that when it’s finished there will be another area to the exhibit.”

Marley said that a large drawing, compiling all of the student’s work, will be kept with the exhibit.

He also spoke of SCC’s involvement in the project, “We serve an area with a large population of Native students so it was just a natural fit there.”

Corrine Glesne, of Asheville, also served as an evaluator for the project.  “I learned so much…it was fun to see the different angles that people brought in and the different discussions that it took us too.  We spent an hour talking about stickball once.”

The exhibit is set to stay at the Cultural Arts Center until Dec. 20.  From there, it will travel to the Jackson County Public Library in Sylva, the Swain County Center for the Arts in Bryson, back to the Blue Ridge Parkway Visitor Center and then to the Junaluska Memorial & Museum in Robbinvsille.  It has also been displayed at SCC and WCU.