EBCI tribal elder Ellen Wachacha Bird was given the title of Beloved Woman of the Eastern Band of Cherokee Indians during the regular Tribal Council session on Thursday, Nov. 7.  Beloved Woman is a designation bestowed upon Cherokee women who are highly respected for their service to the community, their integrity, and their good character. 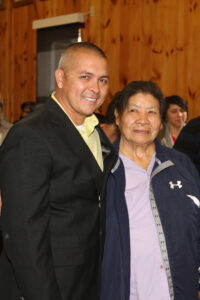 Cherokee County – Snowbird representatives Adam Wachacha and Brandon Jones presented the resolution which was approved unanimously.  They touted her show of virtue in everyday life as well as her willingness to teach Cherokee traditions, culture and language.

In a formal presentation, Reps. Wachacha and Jones presented Bird with a Pendleton blanket.

Rep Jones stated, “I’m very happy for Ella Bird and her recognition as a Beloved Woman.  She has lived a lifestyle that represents all the aspects of what it means to be a Beloved Woman. She has passed down her knowledge of traditional medicines, Cherokee language, quilting, traditional foods, and most importantly she has lived a clean and Godly lifestyle that we should all try to emulate. She is an example that young women can look up to and her mark on this generation will continue to show up in many facets for years to come.  I truly admire her and I am honored to call her my friend.”

Born and raised in Snowbird in Graham County, she is the daughter of Rily Wachacha and Ancy Walkingstick.  A fluent Cherokee speaker, she is a housewife and had ten children (five girls, five boys).  Her daughter, Terinda, stated that her mother is a very humble woman who enjoys quilting, cooking traditional foods, gardening, and canning native food.

In a moving statement, Shirley Oswalt, Snowbird community member, expressed that everybody in the community loves her.

Oswalt referenced a verse in Proverbs about the Virtuous Woman and then she began to describe Bird.  “She’s rare. She’s decent.  She’s nice.  She’s pure.  She’s slow to show anger. She is held with the highest respect by everybody in the community.”

She further stated that Bird is someone you can call your sister, your mom, or your grandmother.

Principal Chief Michell Hicks thanked the Council representatives for bringing the resolution forward, stating, “We could not have picked a more humble person than Ms. Bird for this honor.  It is well deserved.”

Six children from the Snowbird community came forward and displayed quilts that they had made last summer in their quilting class in the Summer Arts Camp, taught by Bird and her daughter, Lilly. The class is part of the Graham County Indian Education program.

Bird was honored as a Matriarch at the 100th anniversary of the Cherokee Indian Fair. She was also recognized as a Distinguished Citizen on Ned Long Day in November 2006.

In closing, Bird commented, “I just want to say thank you and I love you all.”