President Woodrow Wilson proclaimed Nov. 11, 1919 as Armistice Day honoring and recognizing the victory in Europe during World War I.  Almost 19 years later, on May 13, 1938, Congress passed an Act making Nov. 11  each year a legal holiday that would be known as Armistice Day, aka Veteran’s Day. 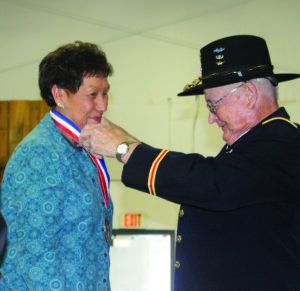 Now, 75 years later, Veteran’s Day celebrations are held all over the country and Cherokee honored its veterans with an event held Monday, Nov. 11 at the Cherokee Indian Fairgrounds.

“I want to thank all of the veterans for their service,” said Principal Chief Michell Hicks. 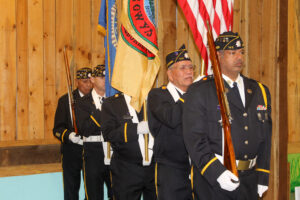 The Steve Youngdeer American Legion Post 143 Color Guard opens the program with the posting of the colors.

“I’d like to think that today I’ve learned something from each one of them,” noted Chief Hicks.

Lew Harding, Steve Youngdeer American Legion Post 143 Commander, commented, “Public honors should be given where public honor is due, and this day is long overdue.  A time or two, or sometimes ten, they had to kick in the door to the good ol’ boys network and they did so with honor and grace.”

Each of the women received an American Legion Distinguished Achievement Award consisting of a medal and a certificate.

Monday’s event was opened with the posting of the colors by the Post 143 Color Guard followed by the singing of the National Anthem by EBCI tribal member Yona Wade.  Ray Kinsland gave the invocation and Marie Junaluska offered the Cherokee prayer.

In welcoming everyone to the event, Commander Harding noted, “They (veterans) interrupted their lives to protect our freedom.  They fought with their minds and their hearts and bodies.  Many have given their lives for the sacrifice of freedom.” 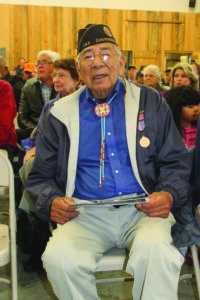 Lt. Col. Dave Banks (Ret.), USMC, a teacher at Smoky Mountain High School was a special guest speaker at the event and thanked his 82-year-old father who served 36 years in the U.S. Navy.  “He is the one who inspired me to continue to work hard no matter what.”

Lt. Col. Banks teaches civics and is the head wrestling coach at Smoky Mountain.  “It is a pleasure working with the youth of today.”

The keynote speaker was Col. Bob Blankenship (Ret.), former Tribal Council Chairman who served as a helicopter pilot during the Vietnam War.  “When we salute the flag, we are showing respect to our country and to our veterans who served our country.”

He read the names of the EBCI tribal members who were killed in action in all wars since World War I.  “The Cherokee have served their country well and many have given the ultimate sacrifice.  Let us honor all who served.  Let us remember that the very last thing they did on this earth was to give their life for us.”

Following his speech, Col. Blankenship helped with the placing of a wreath along with Maj. William Underwood and Sgt. Clifford Long.

The program concluded with a salute to fallen comrades by the Cherokee High School JROTC Honor Guard and the Post 143 Color Guard followed by the playing of Taps, the benediction by Maj. Underwood and a closing prayer by Beloved Man, Jerry Wolfe, a U.S. Navy veteran.