ROBBINSVILLE – Famed Cherokee warrior and leader Junaluska (1775-1868) is known for his heroics on the battlefield and for walking back to his beloved mountains in western North Carolina after being removed on the Trail of Tears.  In 1910, the General Joseph Winston Chapter of the Daughters of the American Revolution erected a monument at his gravesite in Robbinsville. 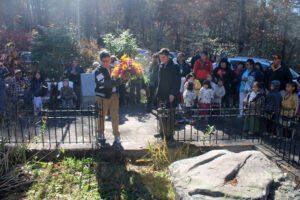 The wreath was laid on the monument on Friday by JLC chairman Tagan Crowe, of Cherokee High School, and JLC member Zane Wachacha, of Robbinsville High School.  Wachacha is a direct descendant of Wachacha, Junaluska’s brother. 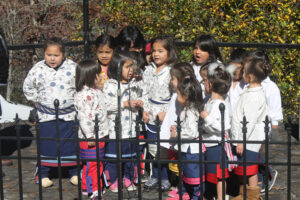 “Cherokee people have always been involved in protecting the United States,” said Miss Cherokee 2013 Madison Crowe in speaking of Junaluska’s service at the Battle of Horseshoe Bend.  “Junaluska sent the message that although they were not citizens at the time that this was still our home and it was our duty to protect it.”

Fourth grade students at the Kituwah Academy opened Friday’s program with the Pledge of Allegiance in the Cherokee language.  That was followed by an opening prayer by Dan Rattler, an EBCI tribal member from the Snowbird Community.  Then, students from the Kituwah Academy’s Preschool, 3-year old and 4-year old classrooms sang the “Cherokee Morning Song” and “Amazing Grace” in the Cherokee language.

Tyler Howe, EBCI Tribal Historic Preservation Office, gave an historical perspective in which he spoke of the sacrifices Junaluska and his fellow warriors of that era made in order to preserve the Cherokee homelands.  “The most important thing is what that generation did to maintain a Cherokee presence to be here still.”

Tribal Council Chairwoman Terri Henry was the guest speaker for the event and said a lot can be learned from Junaluska and his sacrifices, “We are the seventh generation from that time, and we have a responsibility for the seven generations in the future.”

Chairwoman Henry went on to say, “Just like this man here and our forefathers who fought in and around this area and spilled their blood here, we are connected genetically, spiritually and otherwise to this place in which we live, and we will never leave because this is our home.”

Friday’s program was closed with a prayer by Jennie Junaluska, a descendant of Junaluska.