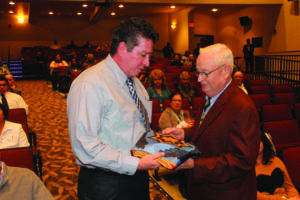 “Vice Chief Ledford was a dear friend of mine,” said Principal Chief Michell Hicks.  “He was a good man.  He was an honest man.  He was a hard worker and probably the neatest and most organized person I’ve ever been around.”

Chief Hicks continued, “There was never a question about what his priority was; it was about helping people.  He set the right example for us…I don’t know if I’ve ever met a nicer person than Vice Chief Ledford.  We’ve all lost a great friend here.” 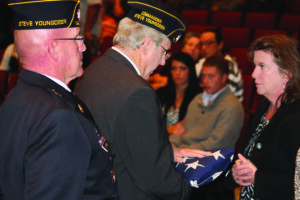 “Vice Chief Bill Ledford was our brother as well as our comrade,” said Lew Harding, Post 143 Commander.  “For his service to his country, we honor him today.  He was a kind and caring man.  The world is a better place because of him.”

“We are here today to honor this brother who has faithfully service his country,” said Commander Harding.

Ray Kinsland, who related that his family and Vice Chief Ledford’s family have known each other and worked together for more than five generations, commented, “We thank the Lord for giving Bill 82 years.  He put a lot into those 82 years.”

He added, “Chief Dugan said that Bill was the most pleasant person she had ever known.  When you’re dealing with the public, it is hard not to make people mad, but Bill always asked people to have patience.” 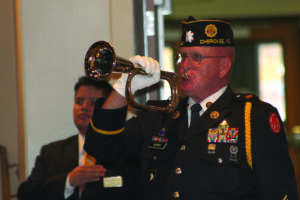 “He took his responsibilities very seriously, but he didn’t take himself too seriously,” noted Kinsland.