Gardening outside of the lines 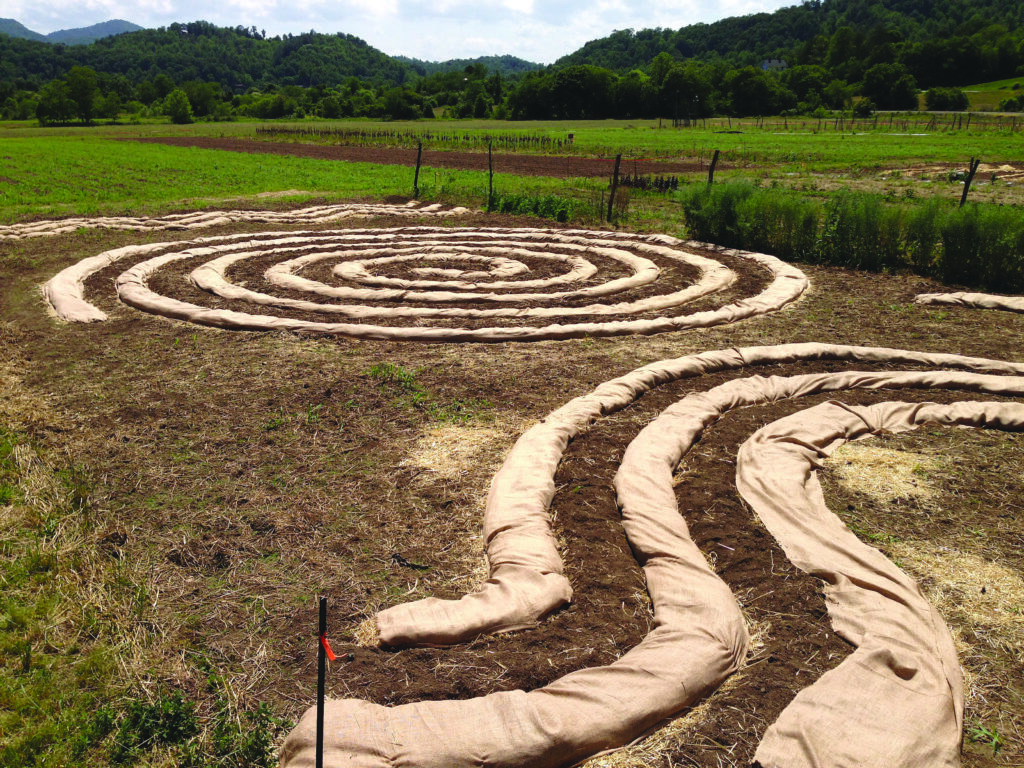 This year’s Cherokee Youth Garden at Kituwah has been laid out in various traditional Cherokee patterns. (Photo courtesy of Pat Oocumma/NativeScapes)

This year’s Cherokee Youth Garden at Kituwah is not only outside of the box; it’s outside of the lines.  The outside rows of the garden are laid out in various traditional Cherokee patterns as opposed to straight rows. 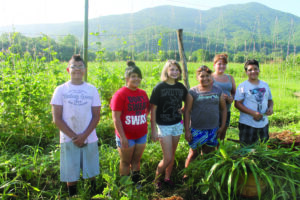 Some of the Cherokee Youth Garden participants are shown at their garden at the Kituwah on the morning of Tuesday, July 23 including (left-right) Sterling Santa Maria, Jaicee Beck, Avery Guy, Chely Guzman, Me-Li Jackson, and Jayden Crowe. (SCOTT MCKIE B.P./One Feather)

“We’re trying to go from the straight row method to something more meaningful, more interesting,” said Karrie Joseph, one of the coordinators of the Healthy Roots grant which is helping facilitate this year’s garden.

Some of the things being grown in this year’s garden includes: watermelons, three types of corn, pumpkins, candy roasters, October beans, eggplant, tomatoes, sunflowers and more.

“We want to increase access and availability of traditional foods,” said Joseph.

The installation of the patterns were designed and laid out by NativeScapes which is owned by EBCI tribal member Pat Oocumma.

“This is the Mother Town,” she said.  “This is where we started.  We wanted to make a garden that was culturally relevant.” 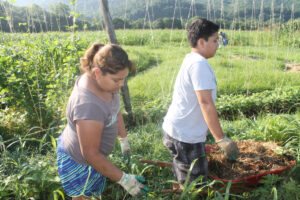 Chely Guzman (left) and Sterling Santa Maria are hard at work at the Cherokee Youth Garden at Kituwah on the morning of Tuesday, July 23. (SCOTT MCKIE B.P./One Feather)

The patterns are worked in using organic straw and biodegradable burlap.  “We put nothing in here that was anything other than organic.”

Ty Oocumma, Pat’s son, is a member of the Warriors of Anikituwah and works with his mother at NativeScapes.  He related that his thoughts on the designs came from thinking about water’s role in Cherokee culture as well as thinking about circles and traditional dances.  Some of the patterns include a snake, rivers, and a traditional corn sifter.

“I came down and talked to the kids a couple of weeks ago and gave them background on the geometric shapes,” noted Ty who said he helped design the outsides of the garden and the youth were given the middle portion to design.  “We’re just trying to show the kids that traditional, linear rows don’t have to always be that way.”

“There is meaning behind this, and we’re just trying to show the kids that they can still do this.  They don’t have to go to a grocery store to get their produce.”

Avery Guy, 14, one of the youth gardeners, commented, “It was a good idea so we can learn gardening and learn how people lived a long time ago.”

The Cherokee Youth Gardeners sell their produce every Thursday from 11am – 1pm in the back parking lot of the Cherokee Indian Hospital.  All of the proceeds go back into the program.