Over a four-week period, Harrah’s Cherokee Casino Resort’s employees raised $3,101 to support the American Cancer Society (ACS) on behalf of employees participating in the Cherokee Relay for Life. 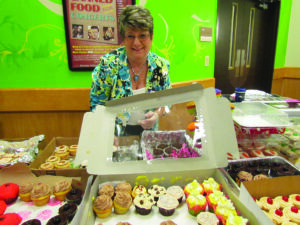 Cupcakes in various flavors including Bitter Devotion, Black Forest Apple, and Wooten Tooten, along with 960 other various flavors, were entered by Harrah’s Cherokee employees for a bake sale at the property to benefit the ACS Asheville chapter.

Forty varieties of cupcakes, baked by employees, were also entered in the Cupcakes for Cures Challenge. Cupcakes were judged on taste, texture, and presentation. Randi Smith of the ACS Asheville chapter, Amy Grimes from the Community Table, and Karen Wilmot of the Swain County Chamber of Commerce all had the difficult duty of naming a winner.

“The base of my cupcake is an old Taste of Home recipe I have had for years,” Fischer explained. “I have made many modifications to come up with the cupcakes I brought.”

A total of $1,319 was raised for the American Cancer Society. The cupcake money, along with nearly $1,800 raised during an employee raffle in May, will be donated to the Harrah’s Cherokee team participating in the Cherokee Relay for Life on August 23. The proceeds will stay in Western North Carolina to be used for research, programs, and services offered by the ACS Asheville chapter.

“It is great to have an event that allows our employees to showcase their creative baking skills”, Janna Hyatt, Harrah’s Cherokee Casino Resort community relations specialist, said. “Cancer has touched so many lives around us and in our communities, and the Cupcakes for Cures Challenge and bake sale was a great way to raise money for a charity that does so much for WNC.”