Elk are thriving in Park

Elk, such as this one photographed at the Oconaluftee Visitor Center in October 2012, are thriving in the Great Smoky Mountains National Park and surrounding areas. (SCOTT MCKIE B.P./One Feather photos)

Re-introduced to the area 12 years ago, elk have quickly become a stately symbol of the Great Smoky Mountains National Park and surrounding areas.  When the elk are in the fields at Cataloochee or at the Oconaluftee Visitors Center, cars filled with tourists line up to catch a view of the majestic animals.

“As far as I am concerned, the reintroduction of the elk into Great Smoky Mountains National Park has been one of the most exciting events for western North Carolinians from all walks of life,” said Joyce Cooper who is the North Carolina state chairperson for the Rocky Mountain Elk Foundation (RMEF), and the co-chairperson of the Great Smoky Mountains Chapter of the RMEF.  “I traveled 2,000 miles to Yellowstone National Park to see my first elk, never dreaming that twenty years later I could drive five miles to show family and friends this magnificent animal.” 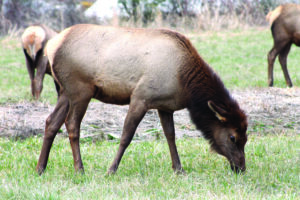 It is not uncommon to see elk on the Cherokee Indian Reservation such as these photographed in the Yellowhill Community in early March.

Joseph Yarkovich, Great Smoky Mountains National Park wildlife biologist, related that the program began in 2001 with 52 elk from the Land Between the Lakes National Recreation Area in Kentucky and another 25 elk in 2002 from the Elk Island National Park in Alberta, Canada.

When asked about the current size of the herd, he related, “Our best estimate would put it at least 150 animals that includes animals inside the National Park, in Cherokee, and on public lands in and around the park.”

Yarkovich related that a population estimate hasn’t been done in several years.

“The first few years the elk went through a learning curve dealing with black bears as predators.  Where they came from, they’d never seen bears.  But, they figured it out, learned how to defend themselves and calf survival is much higher than it used to be.”

He said it is hard to state how large of an elk population this area could support, but he did say Park officials are always monitoring reproduction, survival, disease risks, and monitoring environmental impacts such as vegetative consumption.

Cooper especially praised the work and support of the Tribe, “The Eastern Band of Cherokee Indians has supported the efforts of the Rocky Mountain Elk Foundation from the very beginning of the project with their initial donation of $50,000.  Chief Leon Jones, Chief Michell Hicks, Vice Chief Larry Blythe, and Tribal Council have actively, on a personal basis, financially supported our annual fund-raising banquets.”

She said that Dave Ensley, former manager of EBCI Fish & Wildlife Department, and staff worked to ensure the safety of the elk when they entered the Big Cove area back in April 2001.  “Forrest Parker and his staff continue this support today as they keep an eye on the elk and plant food plots throughout the mountains for all wildlife.”

Cooper added, “Personally, I cannot thank the Cherokee people enough for the many phone calls with information about new babies sighted or an accident, the donations, and the compliments from the school children who see the elk almost daily and are still excited to see them!”

“It’s been a tremendous amount of work, but an awesome amount of pleasure spent watching the babies born right here on the Oconaluftee grow to adulthood and see their beautiful antlers grow each year.”

Yarkovich summed up the herd’s state, “The elk reintroduction has been a pretty large success.  We expect the herd to continue to grow in the future.”

The 20th Annual Big Game Banquet is being hosted by the Great Smoky Mountains Chapter of the RMEF on Saturday, July 27 at Harrah’s Cherokee Casino Hotel.  The event is held a fundraiser for the Foundation and will feature several raffles and auctions.  Info: Joyce Cooper (828) 506-3308 or Joe Treadway (828) 230-6040.