Park road to be closed for months

Newfound Gap Road, closed due to a landslide on Jan. 16, may not be open for several months according to Park and federal officials. (LYNNE HARLAN/EBCI Public Relations)

Tribal leaders toured the site of a landslide in the Great Smoky Mountains National Park with Congressman Mark Meadows (R-NC) and Park officials on Monday, Jan. 28.  The landslide, which occurred on Jan. 16, has closed Newfound Gap Road connecting Cherokee to Gatlinburg, Tenn. 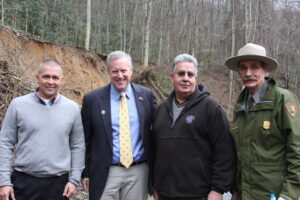 The Great Smoky Mountains National Park is working with the Federal Highways Administration (FHA) on road repairs.  Park officials said the first phase of the work “will include the stabilization of the slide, removal of landslide debris from the work area, and the completion of a path for construction vehicles to access the section of the slide below the roadway.”

An exact timeline for when the road will be repaired and re-opened has not been released, but Park officials are estimating it could be open as early as late May or early June.

Principal Chief Michell Hicks commented, “The landslide which forced the closure of highway 441 through the Great Smoky Mountains National Park will have an impact on Cherokee and the Eastern Band of Cherokee Indians because it severs a major highway between Cherokee and Gatlinburg, Tennessee. But, I would like to reassure the public that Cherokee is open and welcomes visitors who might be restricted from visiting Tennessee.”

Great Smokies superintendent Dale Ditmanson said in a statement, “We recognize the importance of Newfound Gap Road to our neighboring communities in our tourism based economy.  Therefore, we are evaluating all reconstruction options to make sure the road is completed in a timely, but safe and efficient manner.”

Park officals related they will re-vegetate the debris field to combat future erosion. 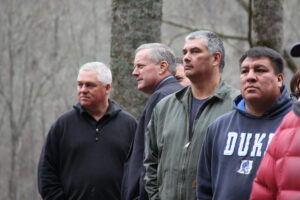 North Carolina Governor Pat McCrory declared a State of Emergency for Graham, Jackson and Swain counties and the Qualla Boundary on Wednesday, Jan. 23.

“The impact of the slide on Cherokee’s economy is nothing less than substantial,” said Jason Lambert, EBCI Division of Commerce director.  “We are most concerned about our non-gaming tourism businesses and the adverse effect the closure will have on them.  The Division of Commerce is working diligently on all fronts to stay ahead of the game and mitigate the effect as much as possible.  We will be strategic in our approach.”

“We are currently staying in close communication with our marketing partners, including Harrah’s Cherokee and the Cherokee Chamber of Commerce, in addition to daily communications with the Office of the Principal Chief.  We have completed a Communications Plan and are beginning to implement that plan.  This will include tactical shifts and special initiatives in our marketing strategy, outreach to our business community, and evaluating other forms of assistance to our local economy.”

Lambert added, “In the meantime, everyone should know that Cherokee is still open and we welcome all visitors to come and stay with us.”