Elizabeth Hillard, a graduate student in the biology program at Western Carolina University, is researching how the elk population uses Great Smoky Mountains National Park resources, including what they eat and their preferred shelter. (WCU photos)

Hillard’s research project has taken place over approximately 50 square miles of park land as part of an ambitious project to improve understanding of how the animals use park resources, including what they eat and their preferred shelter.

“We know that elk populations can swell to unnatural levels that have a negative impact on the environment,” said Joe Yarkovich, a park wildlife biologist who focuses on the elk program and who oversaw Hillard’s research. At Rocky Mountain National Park, for instance, where the elk have no natural predators, the growing herds have destroyed aspen groves and willow stands, Yarkovich said. “We’re trying to get on the front end of it so that we will see those impacts before they take effect and cause much harm to the environment,” he said.

The release of elk into the park began in February 2001 with 25 elk imported from Land Between the Lakes National Recreation Area along the Tennessee-Kentucky border. In 2002, another 27 of the animals were imported from Elk Island National Park in Alberta, Canada. All were released in the Cataloochee area, where many have stayed, though some have migrated west to Cades Cove – animals like the open grassy areas available in both those locations, Hillard said. The precise number of elk is unknown, although a rough estimate puts the population at approximately 150 animals, including those who have traveled outside the park boundaries, according to Yarkovich. Some elk wear radio-collars and are monitored so biologists can learn more about their movements and life spans.

Hillard developed the elk project with her adviser, WCU biology professor Laura DeWald. While reading the park’s environmental assessment of the elk, Hillard saw that future goals included vegetation monitoring and trail mapping. DeWald and Hillard met with Yarkovich and other park personnel and hammered out a role for Hillard, who developed a methodology and project plan that the park approved. Hillard then applied for grant funding from the Rocky Mountain Elk Foundation and in fall 2012 was awarded more than $11,000 for the project.

Hillard’s research has taken a three-pronged approach. To shed light on the preferred habitat of the elk, she spent the winter and spring of 2012 calculating elk densities in different forest types, which involved locating, hiking and mapping 78 miles of elk trails. In July and August, Hillard studied a collection of plots with varying habitat and elk densities, collecting information on overstory, understory, shrub level, the herbaceous level, forest floor and litter-soil level. The third component of the study is an analysis of the principal diet of the park’s elk. To accomplish this, Hillard collected elk fecal pellets in the spring, summer and fall, which she has frozen in storage. After she completes collecting the winter sample, she will send the pellets to the Wildlife Habitat Nutrition Laboratory at Washington State University for analysis. After she draws conclusions from a mountain of data, Hillard plans to complete her thesis and graduate in time to enter a doctoral program in wildlife ecology and management in the fall. 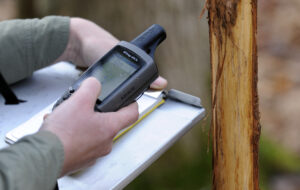 Hillard has walked 78 miles of elk trails in the Great Smoky Mountains National Park for her research project, always traveling with a GPS device and a park radio. At right is a tree that elk have rubbed, stripping it of bark.

Hillard, 30, has professional skills gained from years of experience as a field technician and classroom teacher that have allowed her to perform at a high level. But while Hillard’s project was “probably twice as much as a lot of master of science students,” DeWald said her advisees routinely take advantage of WCU’s geographic location and undertake projects that contribute to the efforts of external agencies including the National Park Service, U.S. Forest Service, N.C. Wildlife Resources Commission and N.C. Cooperative Extension. Another of her current advisees, for instance, is at work on a fire ecology project based in the park.

Such arrangements are mutually beneficial, affording students the opportunity to apply their education in the field and giving strapped agencies high-quality work for minimal financial investment. “Agencies are having to do more with less. This work in the park needed to be done. To have someone like Liz is a godsend to them,” DeWald said. “Our students are involved in acquiring knowledge that can be used to inform resource management decisions.”

“I’m not one to turn down free research,” agreed Yarkovich. “Liz is really taking a load off of my plate. I know the level of work she’s doing and I’m really pleased with it.”

Not only will Hillard’s research inform the park’s wildlife biologists about the elks’ habits, but it also will establish protocols and methodology for future sampling.

“Five years from now, somebody will come back and do it again so we can track changes over longer periods of time, and I’ll hand them this packet and say, ‘This is what needs to be done,’ and it will be what Liz has done for us. She really is setting it up long term,” Yarkovich said.

Hillard’s vegetation research contributes one piece to the larger puzzle of elk in the Smokies. Other components include overall animal and herd health, dispersal patterns, disease monitoring and more. “We’re trying to get a big picture for everything that’s going on regarding carrying capacity for elk in the Smokies,” Yarkovich said.