At their January seminar, the 2012-13 Right Path participants dropped in on the babies of the New Kituwah Academy which is part of the Kituwah Preservation and Education Program (KPEP). The Academy is a Cherokee language immersion program that is rated as a four-star, licensed early education program, through the North Carolina Division of Health and Human Services, Division of Child Development. 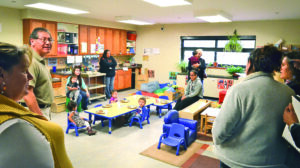 Kituwah Academy currently services nearly 80 young children, kindergarten through 3rd grade. No English is allowed to be spoken past the entrance of New Kituwah Academy. The children learn subject materials taught in any other school in the NC system, except they are taught in their native tongue.

Gil Jackson, KPEP Administrator, welcomed the Right Path group and shared the Academy’s history, accomplishments, and future plans. He shared a story about Kelly Murphy, 2011-12 Right Path alumni, telling how she relentlessly pursued a job working with the children.

“She wasn’t a speaker, but she would not give up!” he said, smiling.

Murphy went on to learn to speak and excelled in classroom environmental rating scale with NC Child Development.

The group visited several classrooms and got to witness the children speaking to one another in their native tongue. The leaders passionately expressed hope that they would be able to speak to the children one day.

Jackson told the group that he wished more people would believe how great KPEP is for the survival of the Cherokee language.

Eddie Paul shared his thoughts, “People say the kids ‘aint learning, (but) I’ve seen it first hand and I’ve talked to the kids (in Cherokee) and write in syllabary with them. It is working, just give it time.”

Nikki Nations said, “I feel so blessed to be a part of something so special. A big sgi to KPEP for welcoming Right Path into your day!”