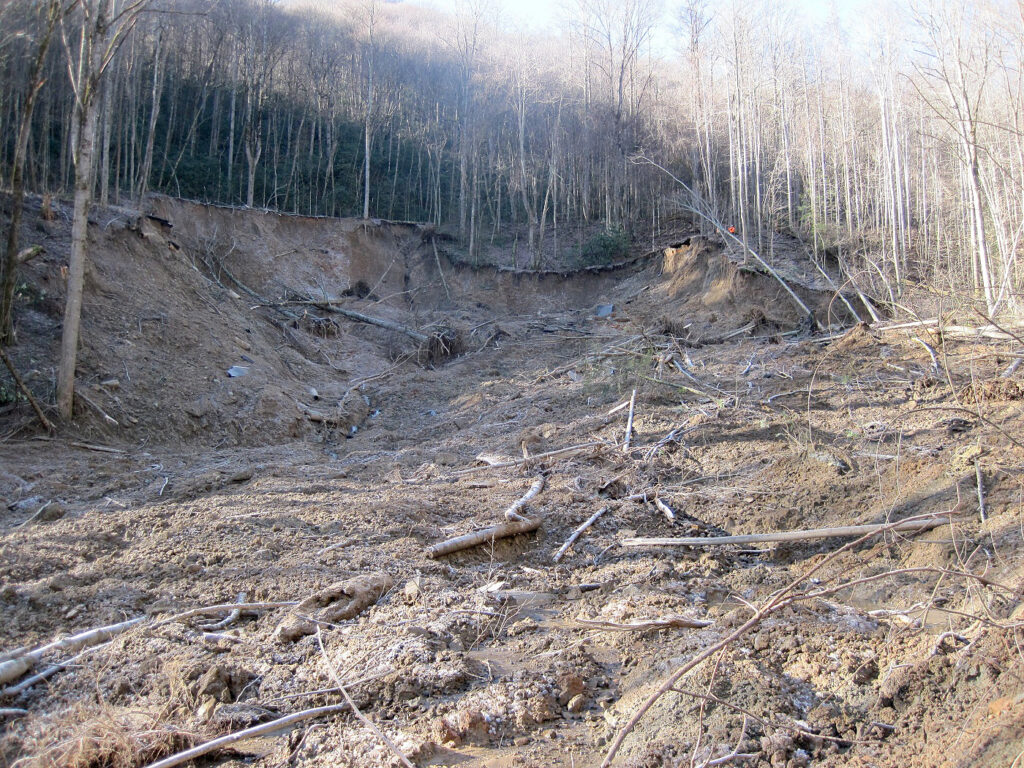 An upslope view of the damage cause by the Jan. 16 landslide to Newfound Gap Road in Great Smoky Mountains National Park. (NPS photo)

Great Smoky Mountains National Park officials have been working with the Federal Highways Administration (FHWA) to assess damage to Newfound Gap Road (U.S. 441) as a result of a Jan.  16 landslide. The FHWA has completed their field survey work, and are now in the initial stage of preparation work to reconstruct the 200 linear feet of road. 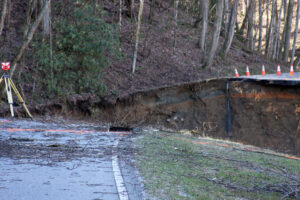 The Jan. 16 landslide took out a large section of Newfound Gap Road as shown in this view from the road itself. (LYNNE HARLAN/EBCI Public Relations)

This first phase of work will include the stabilization of the slide, removal of landslide debris from the work area, and the completion of a path for construction vehicles to access the section of the slide below the roadway. The work is being coordinated by the FHWA and is expected to begin as early as next week.

While the preparation work is taking place, the design of the road repair is in the development process. The road will be reconstructed as a reinforced full slope roadway. The design will allow for the drainage of water which will protect the road and park resources from future damage. This second phase will begin when the initial site preparation work has been completed. A timeline of completion cannot be determined until the final design has been developed and approved.

“We recognize the importance of Newfound Gap Road to our neighboring communities in our tourism based economy,” said Superintendent Dale Ditmanson. “Therefore we are evaluating all reconstruction options to make sure the road work is completed in a timely but safe and efficient manner.”

The Park is moving forward on re-vegetating the three acre debris field with native species to aid in sediment and erosion control. This measure will prevent run off from draining into the Beech Flats Prong stream located just below the slide area.

While the access from Gatlinburg to Cherokee will remained closed during the construction period, Newfound Gap Road has been opened from the Gatlinburg, Tenn.  entrance to Newfound Gap, and from the Cherokee entrance to Smokemont Campground. Visitors who want to sightsee and recreate in the park will still find opportunities through both entrances.

North Carolina Governor Pat McCrory declared a state of emergency on Wednesday, Jan. 23 for areas affected by the road closing including the following counties: Graham, Jackson, Swain and the Qualla Boundary.  He delegated Kieran J. Shanahan, (NC) Secretary of the Department of Public Safety, “to seek assistance from any and all agencies of the United States government as may be needed to meet the emergency and seek reimbursement for costs incurred by the State in responding to this emergency.”

–  NPS, One Feather staff added to this report