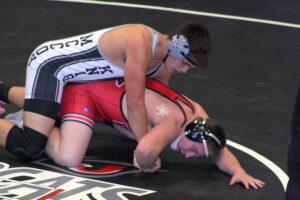 Robbinsville’s Spencer McCoy (shown in photo at left), an EBCI tribal member, was named the Most Outstanding Wrestler at the James Orr Memorial Tournament held in Graham County on Saturday, Jan. 19.  McCoy took first place in the 195lb. division.  With 165 points, Robbinsville beat out nine other teams for the top team in the tournament.

McCoy was recently named tenth in the top 10 sophomore wrestling class (all weight divisions) in the state by Retrorankings.com.  He is ranked second in the 195lb. division.