In a show of solidarity with Canadian First Nations, over 50 people gathered for a march in Cherokee on Saturday, Jan. 19 in connection with the Idle No More movement.  The march went through downtown Cherokee and included a round dance in the middle of town with several speeches afterwards explaining Idle No More. 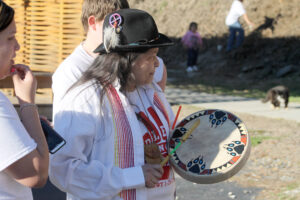 The official website for Idle No More states that the vision of the movement “revolves around Indigenous ways of knowing rooted in Indigenous sovereignty to protect water, air, land and all creation for future generations.  The Conservative (Canadian) government bills beginning with Bill C-45 threaten treaties and this Indigenous vision of sovereignty.”

At the forefront of the movement is Theresa Spence, current Chief of the Attawapiskat First Nation in Canada, who declared a hunger strike on Dec. 11, 2012 to protest Bill C-45.

Tracy French, an EBCI tribal member who organized Saturday’s event, said, “I thought that we, as Eastern Band members, should support our other fellow humans out there because we come from Mother Earth too.  It’s all about Mother Earth.  It’s about the air, it’s about the water.  It’s about the destruction that’s going on.” 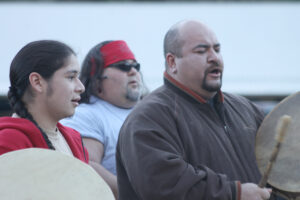 EBCI tribal members Kerry Reed and John Grant, Jr. lead a round dance song in the middle of downtown Cherokee.

She related that she encourages everyone to research more about the Idle No More movement and the current bills affecting First Nations in Canada.  “One day we might need their support, and I figured we are way down here in the south and should show it…we should show our Native pride.”

B.J. McManama, of the Indigenous Environmental Network, was at Saturday’s march.  “Idle No More has come out of the Bill C45…which has negated hundreds of agreements and treaties with Native peoples up there, the First Nations.”

Ryan Little Eagle, of San Antonio, TX, gave a short speech after the march, “They’re trying to hurt our cousins up north, our relatives.  They’re trying to take away our natural resources and take away from Mother Earth which gave us life.”

“We are idle no more.  No more will we take it.  We are standing together as one nation – the red nation.”

For more information on Idle No More, visit their official website at www.idlenomore.ca.