Mr. and Miss Brave are chosen

The yearbook staff at Cherokee High School is in the final stages of preparation to submit the 2013 yearbook, entitled bravebook, to the publishers.  As part of the process, a Mr. and Miss Brave are chosen from the senior class to represent the student body.  Each was expected to meet certain criteria in order to be chosen.  The criteria included a minimum grade point average of 3.0.  The representatives must be a leader among their peers and heavily involved in school activities.  They should be a die-hard Cherokee Braves fans who are inspired and inspiring.  They should possess the following character traits:  responsibility, friendliness, truthfulness, and respectful.  Each should be committed to Cherokee High School, the community, and the Cherokee nation. 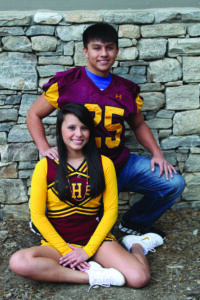 Ashley Bottchenbaugh and Dorian Walkingstick have been chosen as Miss Brave and Mr. Brave for the 2013 senior class. (CCS photo)

Ashley resides in the Big Cove community.  She is the daughter of Andrea and Frankie Bottchenbaugh.

“They are very good parents who are maybe a little too strict than needed, but I know it’s only because they care,” she said.  “They are very supportive in whatever I do, and always expect my very best.  I love them very much, [and] I wouldn’t know what to do without them.”

When asked how she felt about them, she replied, “I love these two so much; and even though we may bump heads every now and then, I wouldn’t trade them for the world.”

One thing she has always admired about her mother was her contentment.  “She doesn’t need much to be happy in this world. I hope I can be as loving, caring, and selfless as her.”

When she reflects on her life at Cherokee High School, she said it has been a “wild ride.”

Ashley said she has learned perseverance and resilience through her experiences at Cherokee High School.  “I’ve been knocked down, but [I] always found a way to get back up….I have had a wonderful high school experience.”

She has had a lot of fun with her classmates and longs for this fun to never end.  She enjoys spending time with family and friends, “hanging out with my high school sweetheart, Dorian,” cheerleading, playing volleyball as well as dance games on X-box, watching ‘The Walking Dead’, and taking care of her pet guinea pig, Chocolate.

She offers a word of advice to her peers, “Be the BEST YOU CAN BE!  Do what is best for you, and never let anything get you down!  This is a tough world.  Even if you do get knocked down, remember that you are the one who has to choose to get back up.”

Dorian resides in the Big Y community.  He is the son of Mareta Bradley of Birdtown and Chris Walkingstick.  He loves his parents very much and appreciates everything his parents have done for him.  His mother has been very supportive in everything that he has done. “[My father] has always pushed me in sports and has taught me pretty much everything from tying my shores to changing the oil in cars.”

Dorian’s role model is his father.  When asked why he chose his father as his role model, Dorian said, “He’s a good man and an even better father.  He’s guided me through my life so far, and I’m sure he’ll continue to do so.  I wouldn’t be the person I am today without him.”

When Dorian reflects on his time here at Cherokee High School, he describes it as a great experience.  He made a lot of good memories and a lot of friends over the years.

He said, “It has gone by way too fast.”  He enjoys playing football, wresting, and track.  Lifting weights is a hobby that he thoroughly enjoys.

When he is not doing these things or hanging out with his girlfriend, he likes to lie around the house watching TV.  His advice to his peers is short and sweet, but very profound:  “GO BIG, or GO HOME.”