Debra England joined the English Department at Cherokee High School.  She started teaching the A.P. course and Freshman English at the beginning of the spring semester in January.  She was born and raised in Cherokee County, North Carolina and lived there her entire life.  She has one daughter, who is a Speech Therapist and married to a middle school math teacher.  Together, they have two children.  Will is the name of Ms. England’s grandson, and he will be seven years old on Valentine’s Day.  Amelia, her granddaughter, just turned two this past August. 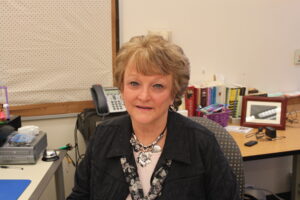 She enjoys travelling around the United States with a motor coach tour group – Keener Price Tours.  She also enjoys line dancing with a group of friends most weekends.

She said, ”Reading for pleasure is a hobby that I especially enjoy.”  As a child, “I liked the social aspect of school!  Well, except for when I was in kindergarten and 1st grade and cried for several weeks when my mother dropped me off.  Seriously, I always enjoyed the reading aspect of English classes, but not until I started college did I find my passion with school and learning – and ultimately my career – teaching.”

Ms. England attended Tri County Community College for an Associate Degree, and then moved on to study at Western Carolina University for undergraduate degrees in K-12 Reading, Elementary K-4, Intermediate 4-6, E/LA 6-9, and English 9-12.  She also earned her Master’s Degree in Education from Western Carolina University.  In addition to her extensive education, she also received National Board Certification in E/LA in 1999 and renewed that certification in 2008.  She has been teaching for over 27 years at the following schools:  Nantahala Union School, Murphy Junior High, and Murphy High School.

According to Ms. England, there were two deciding factors to my becoming a teacher.  “First of all, I saw the importance of having a good and caring teacher in my own education and when my own child began school – coincidentally, that was the same time I was in college deciding on my own degree, and teaching became my passion.”

When asked by a CHS reporter what she would say to the students, she replied:  “I am delighted for the opportunity to work at this school and be a part in your education and your life.  My best advice to Cherokee High School students would be [to] develop a passion for learning and use the willing staff here at your disposal to facilitate your growth!  Enjoy!!”

Darrin Bark has joined Barry Reed in the Woodcarving Class at Cherokee High School.  He is from the Wolfetown Community.  Together with his wife, Dusty Bradley, they have two children.  An alumna of Cherokee High School, Mr. Bark has returned to the school to give back to the students of his community.  According to Ms. Pinnex, “Darrin has always shown his artistic ability.  One of his first drawings was Maggie Wachacha.”

Mr. Bark embraced his artistic ability and used it to pursue an education through Southwestern Community College and Oconaluftee Institute of Arts.  He earned an Associate Degree in Fine Arts at both of these institutions.  He has always worked with Cherokee Central Schools, and we are delighted to have him as part of our staff. 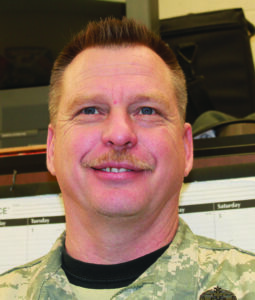 Alva E. Brown, SFC joined the Cherokee High School team under Major Bill Underwood teaching JROTC.  He was born in Bartlesville, Oklahoma and went to school in Bixby and Mannford, Oklahoma.  He has two children:  a girl named Shyanne, who is nine, and a boy named Connor, who is seven.

In his free time, he enjoys scuba diving.  As a kid, he liked school; and his favorite subject was science.  He has served in the United States Army for the past 22 years.  The Braves thank him for his dedicated service in the defense of our country, and we are glad to have him here with us.

SFC Brown is new to the education field.  This is his first teaching assignment.  He is working on a Bachelor of Arts in Workforce Education and Development.  He has attended the University of Oklahoma and Southern Illinois University.

When asked by a CHS reporter what he would say to the students, he replied:  “Before you decide to follow your heart, get the education to follow it to its potential.”

Cherokee High School is delighted to have Ms. England, Mr. Bark, and SFC Brown here and look forward to working with them to help our students grow in character, knowledge, and skills.  Together, we will walk the Sacred Path and lead our students along the way.