The Eastern Band of Cherokee Indians is making its own biodiesel fuel from waste oil and grease in a new facility located behind the Cherokee Transportation Center.  The facility, which can make up to 250 gallons of clean biodiesel in a 24-hour period, officially opened with a ribbon cutting ceremony on Tuesday, Dec. 18. 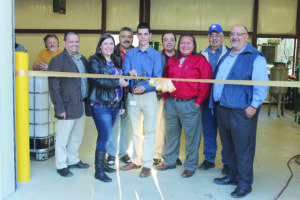 “It’s a small project with a really big meaning,” said Forrest Parker, EBCI Director of Natural Resources and Construction.  “There’s not that many facilities like this in Indian Country, and I definitely feel that what you’re looking at here is maybe not the largest, but definitely the most impactful in Indian Country.”

Parker said the Tribe has partnered with the Cherokee Boys Club on the project.  “My department is the largest user of biodiesel, but we don’t have the capacity to send staff down here to make it every day so the Boys Club has stepped up.”

“I just can’t tell you how proud I am of all the staff for getting this little place put together,” said Parker.  “It’s going to be a huge cost savings.  It’s a huge feather in our hat and the right thing to do.”

According to information from the National Biodiesel Board, “Biodiesel is a clean burning alternative fuel, produced from domestic, renewable resources such as plant oils, animal fats, used cooking oil and even new sources such as algae.”

Katie Tiger, EBCI Office of Environmental & Natural Resources, worked on this project from the beginning.  “This has been a really long time coming.  With EPA funding and tribal match and a bunch of different partners here it is.” 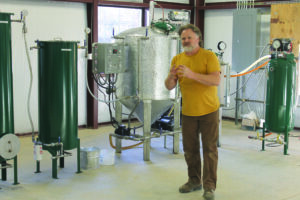 John McClellan, of Verde Bio-Trailers, answers questions about the bio-diesel set-up he built for the Eastern Band of Cherokee Indians during a grand opening of the facility on Wednesday, Dec. 19.

She said there were hurdles to clear during the project including where to locate the building and the actual construction of the building.  “It doesn’t matter though because we’re here now.”

Tiger said that she would eventually like to get the community involved and implement oil drop-off stations at different points around Cherokee.

John McClellan, of Verde Bio-Trailers of Arizona, built the biodiesel set-up in Cherokee.  “Biodiesel in this country seems to be a shunned subject for the most the part.  The rest of the world is really going gang-busters so getting the opportunity to see a community like yours using biodiesel is nice.”

McClellan, who drove to Cherokee from Arizona for Tuesday’s event in a truck powered 100 percent on biodiesel, explained that the biodiesel currently being made at the Cherokee facility is known as B20 which represents a 20 percent biodiesel blend.  He said the blend can increase as more raw materials (i.e. vegetable and animal oils from cooking, etc.) become available.

Big Cove Rep. Perry Shell related, “I think this is in keeping with our culture, Native American culture as a whole, of renewing and using these renewable resources and limiting oil (petroleum) and other things.”

Cherokee County – Snowbird Rep. Diamond Brown, Jr. commented, “I’m all about the environment.  When you go back into history, Native people, they were good stewards of the Earth.  They took care of the Earth.  There was no trash.” 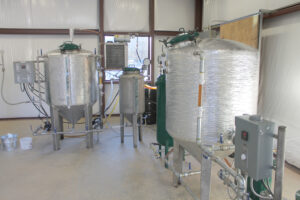 “I’m really big on this.  I’m happy to be taking this step forward.  It’s a bay step, but it’s the first step in the right direction.”