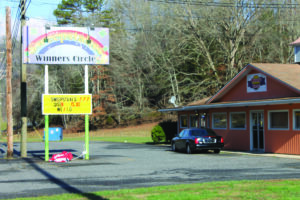 The N.C. Supreme Court has upheld the ban on video sweepstakes businesses like the Winner’s Circle Sweepstakes (shown in photo) that is located right outside of Cherokee. (SCOTT MCKIE B.P./One Feather)

In Friday’s decision, Justice Robin E. Hudson wrote, “We are convinced that the ban on video sweepstakes primarily regulates noncommunicative conduct rather than protected speech.  The statute here makes it ‘unlawful for any person to operate, or place into operation, an electronic machine or device’ to ‘conduct a sweepstakes through the use of an entertaining display.’  Operating or placing into operation an electronic machine is clearly conduct, not speech.”

The North Carolina Court of Appeals ruled 2-1 in March to throw the entire law out.  In their opinion, Judges Ann Marie Calabria and Linda McGee wrote, “The General Assembly cannot, under the guise of regulating sweepstakes, categorically forbid sweepstakes operators from conveying the results of otherwise legal sweepstakes in a constitutionally-protected manner.”

The Eastern Band of Cherokee Indians currently operates the only legal casino in the state of North Carolina.

Chase Brooks, president of Internet Based Sweepstakes Operators, said in a statement after Friday’s ruling, “We maintain that video sweepstakes games are no different than traditional sweepstakes games offered by restaurant chains, soft-drink companies and publishing houses.  We will look at morphing into whatever we need to be under the rule of law to continue our business.”

The North Carolina Family Policy Council (NCFPC) has opposed gambling of any sort in the state.  Bill Brooks, NCFPC president, said in a statement, “This decision by the North Carolina Supreme Court to uphold the state ban on video sweepstakes gambling is a huge victory for the citizens of North Carolina who have been plagued by these establishments that prey upon the most vulnerable in our community through the use of video gambling-like machines that are designed to foster addiction.  It is time for these mini-casinos to close up shop in North Carolina.”