The Cherokee varsity wrestling team evened its score against the Rosman Tigers with a 60-15 win on Tuesday, Dec. 11.  The Braves had previously lost to Rosman in the Rosman Duals, but came back on Tuesday with a full, healthy team. 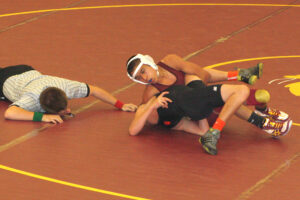 For more photos from this event, visit the One Feather photo gallery at: