Former Principal Chief Gerard Parker passed away on Saturday, Dec. 1, and a memorial service was held by the Eastern Band of Cherokee Indians on Monday, Dec. 10 to honor a man who served the Tribe for more than 20 years. 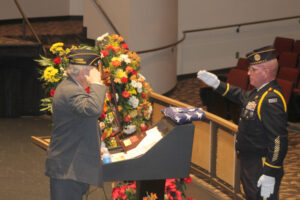 Warren Dupree, Post 143 Service Officer, salutes Post 143 Commander Lew Harding after delivering a U.S. flag that was given to Parker’s family. Monday’s Memorial Service began will full military honors for Parker who served in the U.S. Army in the Korean War.

Monday’s event was held at the Chief Joyce Dugan Cultural Arts Center and began with full military honors for Parker who served in the U.S. Army during the Korean War.

“His service to this country was honorable and required great sacrifice,” said Commander Lew Harding, Steve Youngdeer American Legion Post 143.  “We will miss him.  Our people, our Tribe, and this world are better off because of him.”

Following an official presentation of a U.S. flag to Parker’s family, the Post 143 Color Guard fired a military salute which was followed by the playing of “Taps”.

Parker served as Principal Chief in 1995 and as Vice Chief from 1991-97.  He also served in Tribal Council as the Painttown Representative from 1971-87. 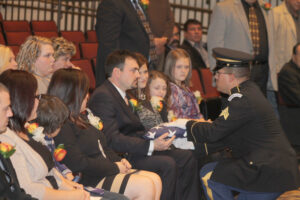 Ray Kinsland spoke on Monday and said Parker’s 76 years were filled with service.  “Those 76 years were very busy most of the time.  Altogether, he served the Tribe for over 22 years.” 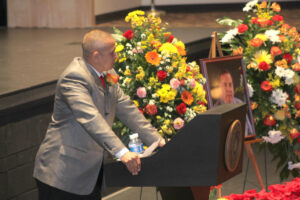 Kinsland said Parker was a man of faith who spent a lot of time reading and studying his Bible.

Principal Chief Michell Hicks commented, “We are going to miss Gerard.  It’s not about roads or buildings that you leave behind.  It’s the message and the work ethic.” 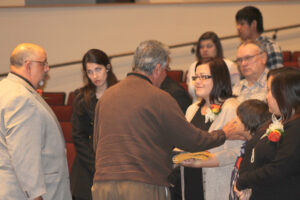 Vice Chief Larry Blythe presents an Eastern Band of Cherokee Indians tribal flag to the Parker family in honor of Parker’s service to the Tribe for more than 20 years.

Chief Hicks went on to say that Parker was a dedicated leader of the Tribe and was always eager to help the younger generation.

The event closed with a presentation of the EBCI tribal flag to the Parker family by Beloved Woman Myrtle Driver.

Memorials may be made in honor of Parker to: Cherokee Indian Hospital Foundation, P.O. Box C-268, Cherokee, NC 28719.

To view more photos from this event, visit the One Feather photo gallery at https://www.theonefeather.com/photo-galleries-2/.