Cherokee High School invited five elders to participate in a special ceremony and dinner for Honor the Elders Day held on Friday, Dec. 7.  Mrs. Pinnix and the planning committee worked tireless to organize the ceremony, dinner, and other arrangements to insure these wonderful individuals felt welcomed, respected, and admired.  It is customary for Cherokee Central Schools to set aside a day to honor and respect the elders in the community for the practical lessons, interesting stories, profound knowledge and vast wisdom they pass on to us.  This event provides an opportunity to bring generations separated by age and experience together to learn from each other.

Harriet Patricia Walkingstick Hornbuckle was the first elder presented at the ceremony.  She resides in the Painttown community on Stillwell Branch.  Her parents were Henry Patrick Walkingstick and Elvira Catherine Hornbuckle.  She was the seventh of eight children in the family including:  Robert Lee Craig, Will Thomas Craig, Charles Elliot Craig, George Howard Craig, Henry Patrick Craig, Lucile Craig, and Naomi Craig.  She spoke of the education she received at Whittier School, Swain County High School, and Southwestern Community College.  Cherokee language was not allowed in her school, and now she only knows a few words of her native language.  She talked about her childhood friends and growing up in Cherokee.  A Pepsi was just fifteen cents back then. 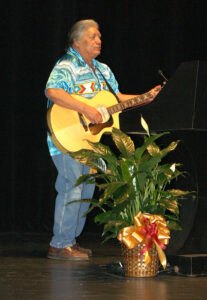 Some of her pastimes included:  softball, basketball, car watching, and eating ice cream.  While attending Southwestern Community College, she received her CNA certification.  She decided on this career because her mother had been sick, and she wanted to know how to help and care for her.  In her life, she has worked as an artist for the homestead, a crafter in variety of craft shops, and other jobs for the tribe and schools.  She married Vernon Hornbuckle and had three children:  Andrew Craig, Everret Craig Hornbuckle, and Laverna “Cookie” Hornbuckle.  She has one step-grandchild (Yona Wade), two other grandchildren (Keeyona and Chelby Hornbuckle), and one great-grandchild (Otty Hootowl).  She shared struggles she dealt with over the course of her life and how she overcame them.  She reminded students of the importance of family and the pain of losing loved ones.

The advice she left with the students:  “When you sit down to earth, thank God for your food and your health.  Before you go to bed at night, thank God for your day and your life.  Always pray.  When you get your per cap check, be careful with it.  Don’t go blow it on just anything.  Put it in a savings account, so you’ll always have money.”

John Ray West was the second elder presented to the students.  He was born in the Yellowhill Community.  His parents were James Robert West and Ella Miller West.  He had two brothers (William Moody and John Wesley West) and one sister (Louwana J. Crowe).  He married Donna Donalds of California at a beautiful wedding ceremony in Las Vegas.  He added that it was not a drive-thru wedding chapel.  It was held in a regular chapel and attended by many friends and neighbors.  He has two sons (James and John West, Jr.) and four step-children (Thomas, Frank, Lora, and Kathy Hanks).

He spoke of his early childhood and teenage years.  He liked watching the Lone Ranger and Roy Rogers and going to see westerns at the drive-in that was located where the Kituwah mound is today.  He recalled packing in as many as twenty Native Americans into a tiny car because it cost $5 a carload to get into the drive-in.  Some of his pastimes included attending the fair and playing stickball.  He also talked about how the Cherokee community changed over time, his military career, and health obstacles.  He told the students about one of the sad memories of his life.  It was 1952.

“One of his friends by the name of Charles George had been killed in Korea.  Then in 1955, his best friend Melvin Hill also died.”  This was a deciding factor for John, and he decided to carry on the military mantle and served during the Korean War.  He was trained to jump out of airplanes, and he still jumps today.  He has travelled around the world to places like Hawaii, Asia, Europe, and North Africa.  He said “Paris was a lively town.”  Although he was discharged from the Army in 1964, he continues to be very active in veteran activities.  Important messages students received though his stories were the value of respect, the ability to overcome obstacles, and the importance of God and service.  His advice to students came in two parts: “1. Listen to the elders for they have had a lot of teaching.  They have wisdom they have gained throughout the years.  2. Give respect towards the United States flag, and the freedom that is bought for us.”

The third elder presented in the ceremony was Ernest Panther.  He is from the Big Cove Community.  His parents are Samuel Panther and Emmaline Sequoyah Panther.  He had seven brothers (Jim, Richard, Sam Jr., Kenny, Snake, and Floyd) and eight sisters (Wilma, Alice, Katherine, Alma, Hattie, Pat Deb, and Gina).  He spoke of his early childhood memories with his friends the Swimmer boys – Herbert, Mac, Virgil, and Don.  He remembered going fishing, catching crayfish, and sledding in the winter.

He spoke about his education and military career.  He attended the day school at Big Cove until he was in the 6th or 7th grade.  One of the punishments for Mr. Ralph Hatcliff’s class was writing 200 pages of information.  He also told a funny story about eating ramps too close to a log that had a skunk in it.  Needless to say, they got sprayed; and he hasn’t been able to eat ramps since that time.

According to Ernest, most of what he knows today, he learned in the military.  He joined the U.S. Air Force and spent twenty-one years in the military.  He learned about heavy duty equipment, fabrication, heating and air conditioning, and computer science.  Out of all his foreign military exploits, the county he liked most was Japan because it was very beautiful and friendly.  He also learned to speak Japanese and some Korean.  His most exciting job throughout his life was being a Mohawk extra in a Davy Crockett film.  He was paid $100.00 to play dead in a battle scene that was staged on Eugene Littlejohn’s property.  In the movie, the white soldiers came down the Soco River by the Old Day School.  As the soldiers came through, they saw Ernest playing dead.  His advice to students was to “get an education.  Make sure you want a military career.  Get at least two years of college before getting into the military.  Strive for the best.  [And] overcome your obstacles.”

The last to be presented at the ceremony was Lillian Saunooke Franklin.  She was from the Yellowhill Community.  Her parents were Margaret Smith Ratcliff and Cain Saunooke.  She had two brothers (Adam and Solomon) and three sisters (Golinda, Bell, and Vivian).  She recalled growing up with her friends Robert, Ross, Becky, and Marie Arch.  She liked to play ball, climb trees, and hike.  As a teenager and young adult, she enjoyed going to the movies in Bryson City, church and square dances.

She reminisced about church and Sunday school.  Lillian says Doc Smith “never put anybody down, and never hand anything bad to say about people.”  She said Lou West, her favorite Sunday school teacher explained in simple terms what life was all about.  Lillian grew up and had two children (Doris Sharp and Deb Lee).  She now has seven grandchildren, fifteen great-grandchildren, and two great-great-grandchildren.  She related her education and her fondest and worst memories to the students in which students could find life lessons.  Speaking Cherokee was not allowed when she attended school.  If you were caught you were punished by being popped on your hands with a ruler by the teacher.  She talked about life’s struggles and obstacles.  Privacy was one of the main obstacles because everyone was always right there.  Her advice to students was to “get a good education and wait to have kids until you get a good education.”  She also stated “Parents nowadays need to discipline their kids better and teach them to respect elders and respect their parents.”

Each of the stories of the elders was presented by Ray Kinsland.  Students and family escorted the elders to the stage and joined them after the ceremony for a delicious reception hosted at Granny’s Kitchen.  The stage was adorned with a beautiful decorated Christmas tree and lighted packages mixed in with real gifts that were presented by Principal Caldwell, Assistant Principal Barker, and students to the elders along with a certificate and white poinsettia.  The Cherokee Elementary Traditional singers sang for the elders, and Robert Wolfe played a favorite song of each of the elders.  There was some Elvis Pressley, Johnny Cash, Merle Haggard, and a little gospel performed.