Cherokee Central Schools dedicated the Cherokee High School Arena the Charles George Memorial Arena on Friday, Dec. 7. in honor of PFC Charles George, an EBCI tribal member who won the Medal of Honor during the Korean War.  He gave up his life to save his fellow soldiers. 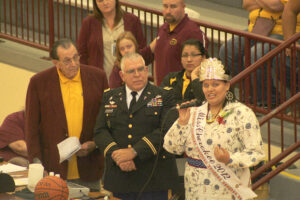 The dedication ceremony opened with a drum song and was followed by the presentation of colors, the National Anthem, and the Pledge of Allegiance.  Kinsland said a prayer and provided a history.  Dupree read the history and citation of PFC Charles George.

Principal Chief Michell Hicks, Chairman Jim Owle, CCS Superintendent Walt Swan, and CCS School Board Chairman Lori Blankenship dedicated the arena and presented a plaque to a representative from the George family.  A few comments and prayer closed the ceremony with a drum song prelude.

Many students and volunteers worked tirelessly to prepare the arena for the rededication.  PFC Charles George’s name in Cherokee syllabary in the schools colors, maroon and gold, was added by the art students above the entrance to the arena.  Pictures of Charles George in military service, the Medal of Honor, the citation, and certificate are displayed on the wall to the left upon entering the arena’s second floor.  Nestled among these pictures is a bronze plaque with the following statement:

VALOR AND BRAVERY IN ACTION WHICH

SAVED THE LAVES OF FIVE OF HIS COMRADES.

IN THIS ACTION, PRIVATE FIRST CLASS

42ND DIVISION, LOST HIS LIFE ON

HE WAS A MEMBER OF THE EASTERN

BAND OF CHEROKEES.  THIS GYMNASIUM IS

NAMED IN HIS HONOR.