OLD SALEM – The U.S. History Honors classes of Heath Robertson and Kelley Canaday took a field trip on Saturday, Dec.  1 to Old Salem.  Students included Kayla Bradley, Chicoah Ledford, Derrick Ledford, Jalon Lossiah, Joi Owle, Silas Reed-Littlejohn, Miranda Smith, Stephen Swan, and Taran Swimmer.  The purpose of the trip was to give students a first-hand look at history.  They could use all five senses to add to the classroom lecture and textbook reading in order to create a better understanding of the facts and perspectives of the time period and life in North Carolina. 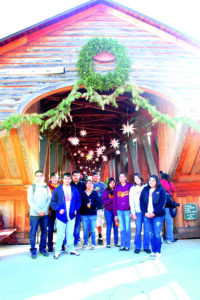 They left Cherokee High School at 5:15 a.m. on Saturday morning and stopped in Asheville for breakfast.  They hit the road again and arrived at Old Salem just before the exhibits opened.  The students watched an introductory film of Old Salem’s history and development, sampled drinks and treats from the Visitor Center Snack Bar, walked around the exhibits in the Visitor Center, and explored the gift store.  They enjoyed dressing up in the Union and Confederate hats and playing with the toy muskets.

When the exhibits opened, the group crossed over the covered bridge to walk up Main Street.  The first stop was the gun shop.  The exhibit guide demonstrated how a musket was crafted, assembled, and loaded.  He spoke of the history of the shop and gunsmith.  Students were very engaged in listening to his stories, asking questions, and observing the artifacts in the shop.  Several beautifully detailed muskets, pistols, and other items were on display that sparked the students’ interest.  One student even noticed a copy of the Cherokee Phoenix posted on the wall.

The group continued to stroll down the cobblestone sidewalk to the tavern.  The students heard about the history of the site, what the roles of women and men were during the time period, and methods of entertainment.  Students had the opportunity to play period games that were located in the men’s assembling area.  Games included:  Life (not the modern version), Tanagrams, Checkers, and Chess.  They also tested a mattress of the time period.

Their favorite stop along the tour was the bakery.  They tasted cookies, cakes, and cheese stars made from ingredients of the time period using cooking and baking methods and equipment from the time period.  They observed demonstrators cooking over open fires, using brick ovens, and heating water for dishes and laundry purposes.  The students asked lots of questions about the equipment and these methods.  They were curious about the meats hanging from ceiling, spices being dried, and the variety of breads cooling on racks.

Students were really inquisitive when exploring the Old Salem’s Apothecary (the physician and drug store).  The guide presented medicines, methods, and tools used for surgery and healing by physicians of the time period.  He offered to help fix anyone with a toothache using the crude and painful tooth key used to extract teeth.  Stephen Swan quickly volunteered, but he changed his mind quickly when he heard how it would be used.

Students respectfully explored the Moravian Church graveyard called “God’s Acre.”  On the way back, the students explored a newer exhibit which was erected to explore the African-American perspective of the history of Old Salem.  They explain how in the beginning of the settlement, there was unity and equality between the two races.  Slowly, as slavery increased in the South, separation of the races was implemented.  A separate church was built at the other end of Church Street for the African Americans.  The first structure was the African Moravian Log Church.  The second structure was made from brick.  This structure was later expanded to include a Sunday school.  This church also contained a graveyard.  For the past several years, this structure is undergoing an archaeological excavation.  Students were able to see the negative and positive impacts of archaeology on a site as well as the impact of prejudice and racism in American history.  They were surprised to hear that it did not start that way.

Students stopped in Statesville on the way back for a late lunch and arrived back at Cherokee High School around 5:30 p.m.  Both students and chaperones were tired from the long day, but it was a wonderful experience that promoted hands-on learning and a greater understanding of history, the people, the region, and concepts.

Kelley Canaday said, “It was nice having the opportunity to get to know the students outside the classroom and seeing the students experience history coming to life.”