ASHEVILLE – Sixty years to the day, Pfc. Charles George was honored and remembered for an incredible act of bravery and heroism that saved two of his comrades and cost him his life.  Pfc. George, an EBCI tribal member, threw himself on a grenade saving his buddies on Nov. 30, 1952 near Songnae-dong, Korea, an act that would earn him a posthumous Medal of Honor. 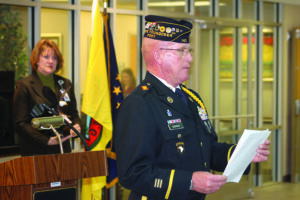 Friday’s event, which featured members of the Steve Youngdeer American Legion Post 143, was held at the Charles George VA Medical Center in Asheville.  The event was held as part of a day-long celebration of Native American Heritage Month at the Center.

“Pfc. Charles George’s sacrifice is a model for all staff members and volunteers here who have the honor of serving veterans who come to our medical center and our clinics in Rutherfordton and Franklin,” said Cynthia Prifogle, Charles George VA Medical Center director.  “We are not combat soldiers like him, but if there is something that we can do to help improve the lives of our veterans and their families, we hope we will all be just as willing as Pfc. George to take necessary action.  I am very proud to lead this Medical Center and Clinics that are named after Pfc. Charles George.” 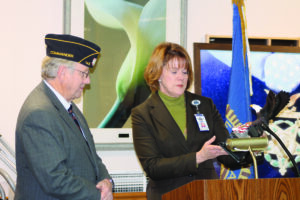 Post 143 Commander Lew Harding commented, “This courageous young soldier honored us all, and also we lift you up who serve us all in this medical capacity that we appreciate so very much.” 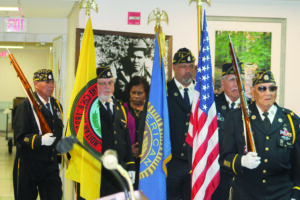 “At 20 years old, he was more than a new recruit volunteering for service in Korea, he was a warrior following the footsteps of his ancestors going into combat to protect his people.”

Dupree read the Medal of Honor citation for Pfc. George.

The Post 143 Color Guard posted and retired the colors for Friday’s event which closed with the playing of “Taps”.