VONORE, Tenn. – The Sequoyah Birthplace Museum, Tennessee’s only tribally owned museum and Fort Loudoun State Historic Area are partnering for the Great Island Festival, slated for Sept. 8-9, from 10a.m. until 5p.m. each day.

At the Sequoyah Birthplace Museum, visitors will have the opportunity to step back in time to experience Native American food, arts and crafts demonstrations, music and dance. Special demonstrations and displays will include Cherokee life in 1762 and a Civil War encampment and battle re-enactment.  This year’s theme is “The 250th Anniversary of Lt. Timberlake’s Visit to the Cherokee Overhill”.  Visitors will experience the same sights, sounds, tastes and smells Lt. Henry Timberlake experienced when he discovered the region some 250 years ago. Dozens of craftsmen and demonstrators will be on hand recreating everything Timberlake documented on his first visit.  Meet Miss Cherokee.  Special entertainment will be provided by the Warrior Dancers of Ani-Kituhwa the Eastern Band of the Cherokee Indians official ambassadors, Cherokee flutis Matt Tooni, a Cherokee Stickball game, Cherokee food demonstrations by Cherokee author Johnnie Sue Myers.  On Saturday, the Tennessee Wildlife Birds of Prey program will be featured and on Sunday a blowgun competition will be held.   Stop by the museum from 1-3pm both days and meet Bill Landry from the Heartland Series.  Bill will be doing a book signing for his book “Appalachian Tales & Heartland Adventures” and check out our new Emissaries of Peace exhibit in the museum as well.

Saturday evening starting at 6pm will be a Civil War period dance with music in our pavilion.  Be sure to bring a blanket or a chair to enjoy the music and dancing.

Other activities include a blow gun competition and posters from Cherokee Elementary School.  Darts, beads, talking sticks, face painting and free Cherokee name cards will be available for children.  Traditional Indian Fry bread, Indian tacos, and other food and drinks will be sold.

At the 18th century Trade Faire at Fort Loudoun will feature encampments of soldiers, settlers and Native Americans.  There will be demonstrations throughout the day in artillery and musketry, along with several battles and skirmish re-enactments.  Merchants and artisans will be on hand to peddle food and wares reminiscent of the time.  Period food will be sold by “Two French Tarts.” 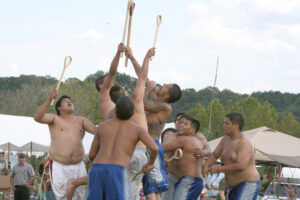 Music and other entertainment acts will include The Traveling Caudells, a traditional vocal duo; Out of the Ordinary, featuring a hammered dulcimer, English guitar, harp and vocals; and the Beggar Boys, talented singers and fiddlers.  An 18th century magician, Common Stocks Curious Booth of Wonders, and the Amazing Juggling Budabi Brothers will also delight and astonish visitors of all ages. Returning this year will be Faire Wynds Circus, featuring musicians, a conjuror, equalibrialist, contortionist and an escape artist.

Festival parking is at Sequoyah Birthplace Museum; located at 576 Highway 360 in Vonore, Tenn. Free shuttle buses will provide transportation for visitors from each site (approximately 1.5 miles).  Adult tickets are $5.00 to the Sequoyah Birthplace Museum and $5.00 to the Trade Faire.  Kids 12 and under are admitted free of charge.  Advance tickets are on sale at both locations until September.